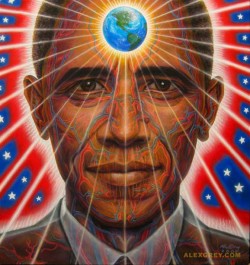 The Obama Administration has succeeded in rewriting the United States Constitution by winning the right to indefinitely imprison people without charges.

Yesterday, a three-judge panel of the D.C. Circuit Court of Appeals ruled in favor of the White House, holding that detainees abducted outside of Afghanistan and then shipped to the detention camp in Bagram have no right to contest the legitimacy of their detention in a U.S. federal court. Why? Because Afghanistan, unlike Guantanamo, is a war zone. In other words, non-citizens detained by the United States have absolutely no right to appeal as long as they are held in a war zone.

Now, the next step is to declare parts of the South-West border as a “war zone” to capture and detain “those Mexicans” indefinitely.

A little background is in order. Post 9-11, the Presidential Military Order was approved by Congress, giving President George W. Bush the right to waive Constitutionally-protected habeas corpus rights and hold “enemy combatants” indefinitely without pressing charges, which would allow for court hearings and legal counsel. However, the U.S. Supreme Court reaffirmed citizens’ right to seek habeas corpus and shot down an attempt from Congress to strip courts of jurisdiction on detainees housed at Guantanamo Bay. Congress persisted, labeling the detainees “unlawful enemy combatants” while stripping non-citizens of the right to appeal indefinite detention.

The matter ended up with the United States Supreme Court as Boumediene v. Bush, where the justices ruled that the Constitution grants habeas corpus rights to even non-citizens held at Guantanamo. Since then, Guantanamo detainees have won 35 out of 48 habeas hearings on grounds of insufficient evidence to justify their detention. Then, the Bush White House incredibly argued that the same rights did not apply to detainees in Bagram, Afghanistan, just because they were held in Bagram, even if they were shipped there after being captured elsewhere.

A new concentration camp denying non-citizens the right to appeal indefinite detention was underway, and Obama was the grand hope who faltered, as seen in this Rachel Maddow report:

Many civil libertarians and constitutional scholars were shocked when the new White House not only embraced the idea of indefinite detention from the Bush era, but went further to advocate for “prolonged detention” as a way to prosecute future hypothetical crimes. Just to be clear, Obama wanted to indefinitely detain people not to punish them for past crimes, but to prevent them from committing crimes in the future. That’s certainly a new one.

Advocates watched as Obama’s lawyers unsuccessfully argued that military detainees in Afghanistan have no right to habeas corpus in Afghanistan just because the government arbitrarily dropped them there. Even a Bush-appointed right-wing judge like John Bates Judge Bates rejected the Obama position because the Constitutional concern was the same: the Commander in Chief does not have the right to indefinitely imprison people anywhere. It isn’t rocket science.

But the White House finally scored a victory yesterday. And now they can abduct people anywhere in the world and imprison them for as long as they want without any judicial review.

Of course if other countries applied the same vile standards to detained American soldiers who are “unlawful enemy combatants” occupying their land, the Obama Administration would be up in arms.