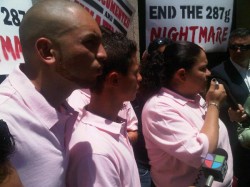 Waving away concerns from supporters, undocumented youth from the Trail of DREAMs and the DREAM Act 5 met with Sheriff Joe Arpaio today to discuss several issues with him, ranging from the new anti-immigrant SB 1070 to immigration reform.

As concerned supporters watched on, nervously walking the corridors, biting their nails and checking their Twitter for updates, the students walked out approximately 45 minutes later tweeting that they met with Sheriff Joe Arpaio who agrees that “the immigration system is broken and unjust laws need to be changed to not be enforced.”

They were followed by hordes of media personnel for a press conference shortly thereafter.

“We showed our humanity to a man that has been terrorizing our people,” said Gaby Pacheco, one of the students from the Trail of DREAMs who met with Arpaio.

And yet, Pacheco asks us to show compassion for Sheriff Arpaio for he is a brother who has simply strayed and we must bring him back to the light.

Reportedly, Sheriff Joe Arpaio told the students that he doesn’t go around rounding up people based on how they look, contrary to news coverage about his “crime sweeps,” and gave the students his business card, indicating that he was open to having further conversation with them. “Don’t be afraid to call me,” said Arpaio. “I have compassion for you but my job overrides my compassion.”

That is certainly news for the woman forced to give birth while shackled, immigrants paraded around in pink underwear, and many others who have been racially profiled while Sheriff Joe ignored real law enforcement priorities.

Additionally, readers should take note that Sheriff Joe Arpaio thinks sending troops to the border is a mere political stunt that does nothing to solve the issue of illegal immigration.

The meeting confirms long-held suspicions that Sheriff Joe is an attention-holic public official who loves to be in the limelight, but that his bark is far worse than his bite when faced with a group of undocumented students who simply want to contribute to the United States.