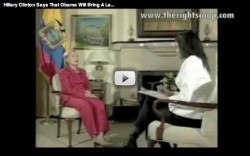 Update: Officials have since confirmed to news sources that a lawsuit is in the works.

Secretary of State Hillary Clinton just delivered a nasty surprise to Arizona Governor Jan Brewer via an Ecuador TV journalist: the Justice Department is preparing a lawsuit against SB 1070, the Arizona law that allows local law enforcement to use racial profiling as a way to determine immigration status.

“The Justice Department, under his direction, will be bringing a lawsuit against the act. But the more important commitment that President Obama has made is to try to introduce a path … pass comprehensive immigration reform,” the Secretary of State declared in a candid interview with Gabriella Baer of NTN24.

Did Clinton let the cat out of the bag? Given the fact that the United States State Department edited the official transcript of the entire interview to omit any mention of Clinton talking about SB 1070, it looks like the Secretary of State did disclose something that the federal government did not want disclosed before an official announcement.

When asked about the apparent miscommunication between the Secretary of State and the Department of Justice, a spokesperson diplomatically replied that the Justice Department continued to review the law.

Governor Brewer is furious to learn about a possible lawsuit from an Ecuadorian press and many are appalled by Clinton’s lapse of judgment in leaking the information ahead of time. However, the fact that the DOJ continues to “review” whether they should file a lawsuit to oppose racial profiling is the real appalling factor here.