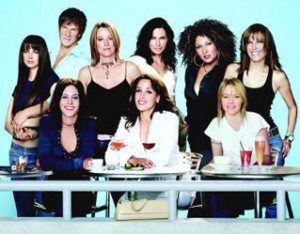 Listen up: Rumor has it that The L Word and Sex in the City have mated to create a love-child that satisfies the ultimate white heterosexual male fantasy. It’s called The Real L Word.

When the Showtime original series The L Word debuted in 2004, it was instantly embraced by queer women starved for representation in popular culture. To be sure, the groundbreaking show was accused of presenting mostly white, middle-class, lipstick lesbians in Los Angeles. But it was also celebrated for dispelling stereotypes about lesbian lives, while putting forward some positive portrayals of queer women.

Now series creator and director Ilene Chaiken is back with a reality show based on the L Word franchise that promises more of the same old Sapphic fantasy — and unfortunately, it stays at that level of reality. The first episode of the show aired yesterday, and far from portraying a healthy and serious picture of lesbian life, the so-called Real L Word depicts most queer women in Los Angeles as trashy, clueless, superficial and overwhelmingly white.

Currently, The Real L Word is being heralded as the first lesbian-themed TV reality show to hit a mainstream United States channel. But not even counting Rachel Maddow, such a statement ignores how Gimme Sugar on LOGO came first, and featured three Asian-American women as part of its main cast of six lesbian and bisexual women. The Real L Word is hardly path-breaking. Instead, when it comes to diversity, it’s actually regressing. For Showtime and Ilene Chaiken, women of color lesbians don’t seem to exist in Los Angeles.

The show marks quite an unexpected comeback for Ilene Chaiken. After a disappointing sixth season, her prison-based The L Word spin-off starring Leisha Hailey was rejected by Showtime — probably since it was grim and dark, and promised more diversity of women. After all, given how the show was about queer women in prison, it would be hard for television to avoid depicting the overwhelming number of racial and ethnic minority women behind bars. Sadly, that same standard of accuracy isn’t afforded to Chaiken’s latest representation of Los Angeles’s lesbian scene.

Instead, it seems like Showtime wanted to maintain the glamor and gloss of the L Word and hoped to lure back its lost audience with its old reliable brand. Only this time around, the women pictured are even more light-skinned and pale. In The Real L Word, there’s no Jennifer Beals acting out the half-hatched storyline of a bi-racial power lesbian, no Pam Grier to deliver one-liners that help remind the audience that she is black.

Most American homes don’t get Showtime. But even if they do get the programming, the pseudo reality unfolding in front of their eyes is hopelessly shallow — the ultimate male girl-on-girl fantasy, a white-washed and melodramatic portrait. Maybe the United States is not ready to watch real queer women?

Right now, though I shudder at the fact, The Real L Word is the only mainstream TV portrayal of real lesbians. It’s just too bad for us that the “L” stands for “Lost in white heterosexual fantasy land.”