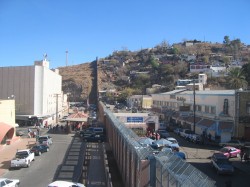 Over 23,000 U.S. Border Patrol agents equipped with the best technology money can buy and a $17.2 billion budget for FY 2010 is not enough for U.S. Customs and Border Protection to secure the borders of the United States.

Speaking at a North Tempe Tea Party townhall, Senator Jon Kyl from the “Papers, Please” state of Arizona told constituents that he had a private conversation with President Obama, where the President rejected tougher border enforcement unless Republicans acquiesced to demands for comprehensive immigration reform. According to Sen. Kyl, the White House believes that border enforcement is a bargaining chip for securing Republican votes in order to pass a comprehensive immigration reform bill and hence, Obama is keeping a secure border hostage till Republicans can agree to pass a comprehensive bill.

The Tea Partiers caught the bait and went wild enough for the White House to release a response. “The President didn’t say that and Senator Kyl knows it. There are more resources dedicated toward border security today than ever before, but, as the President has made clear, truly securing the border will require a comprehensive solution to our broken immigration system,” White House communications director Dan Pfeiffer said in a statement to ABC News.

Lobbyists and policy wonks have known for a while that enhanced border security and mandatory E-verify are the bargaining chips for legalizing 11 million undocumented immigrants. Neither Kyl nor Obama are saying anything new with their statements. Sen. Kyl had been in favor of comprehensive immigration reform, but with a new administration, he is now against it. President Obama is flexing his homeland security muscle more the the former President Bush. Politicians like Kyl and Obama know that throwing money at the problem is not the answer, but they do so anyway for personal and political reasons.

Meanwhile, the call for “securing the border” has become an excuse for not advancing any sort of immigration reform package. Heck, even John McCain now says that he is against the DREAM Act for humanitarian reasons and that we must secure the border first, telling Think Progress that he doesn’t want more undocumented youth to suffer the consequences of a porous border.

How secure should the United States make the South-West border against Mexico? Would erecting a 2000-mile wall with surveillance technologies while degrading the environment and destroying border communities be enough? Politicians know that just like deporting 11 million undocumented immigrants, securing the border against all undocumented immigrants is a pipe-dream.

First, there’s no way to determine the number of unauthorized immigrants that enter through the U.S.-Mexico border, hence there is no way to gauge an acceptable rate of permeability. Second, migrants head North in search of better jobs due to economic trade agreements like NAFTA that decimated the living wages and standards of Mexican workers. Increased enforcement won’t stop to this economic response from the Global South, but would fuel more innovative and dangerous ways of coming into the U.S. without proper documents.

Third, enhancing border security has actually led to more undocumented migration. In prosperous economic times, border agents looked the other way as immigrant laborers crossed into the U.S., knowing that they would work hard and eventually head back home. But in the past two decades, more stringent enforcement has prevented migrants from leaving because they fear that they won’t be able to return. And finally, up to half of undocumented immigrants residing here came to the U.S. on legal visas, but somehow politicians are not too bothered by this fact.

Securing the border has nothing to do with meeting a tangible goal. It serves as a distraction that does nothing to impact the economic strain felt by low-income Americans. Undocumented immigrants are not the ones moving American jobs overseas and getting big bailouts from the government, but they are easily scapegoated.

There’s no real winner in this contest between President Obama and Senator Kyl, Democrats and Republicans. But there is a clear loser: working class Americans, with or without papers.