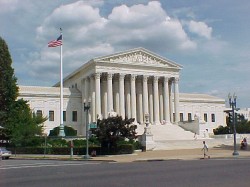 Once again, the Obama Administration has been caught on the wrong side of the law trying to deport a long-time legal permanent resident for merely carrying a joint and then a single prescription pill (without a prescription). And here we thought that given limited resources, federal immigration officials were focused on prosecuting and removing criminal aliens.

A couple months back, Change.org Editor Alex DiBranco wrote about how smoking a couple of joints could get legal permanent residents deported. Here’s some good news: In Carachuri-Rosendo vs. Holder, the Supreme Court of the United States unanimously ruled against counting a couple minor drug convictions as grounds for automatic deportation. Even Justices Scalia and Thomas joined in the majority with concurring opinions.

Congress enacted the Immigration and Nationality Act (INA) in 1952 that outlines the circumstances under which immigrants can be removed from the country. Under the INA, an immigrant in violation of federal law is ineligible for cancellation of removal if convicted of an aggravated felony which the INA defines as any “drug trafficking crime.”

Jose Angel Carachuri-Rosendo was a lawful permanent resident when he was convicted for possession of a small amount of marijuana, which is a Class B misdemeanor amounting to 20 days jail time under state law. The following year, he was arrested and convicted for possessing a single anti-anxiety pill without a prescription, a 10-day sentence that was classified as a Class A misdemeanor in Texas. The federal government initiated deportation proceedings against Jose, charging that the state misdemeanor could have been prosecuted as an aggravated felony in a federal court.

Jose and his attorney filed unsuccessfully for cancellation of removal. The Department of Homeland Security (DHS), backed by the Department of Justice, tried to argue that even though Jose had neither been charged nor convicted of a federal felony, the fact that he could have been prosecuted for a federal felony, means that he was not eligible for cancellation of removal. The Immigration Judge and the BIA, as usual, sided with the DHS. Carachuri-Rosendo argued tried to argue that he was not ineligible for cancellation because he was not convicted of an aggravated felony by virtue of his second possession conviction.

Justice Stevens noted in his opinion that using definitions from a basic Merriam-Webster’s dictionary might help the federal government understand how to use the concept of “aggravated felony.” He wrote: “one does not usually think of a 10-day sentence for unauthorized possession of one prescription pill as an “aggravated felony.” This Court must be very wary in this case because the Government seeks a result that the English language tells [the Court] not to expect.”

Still, Carachuri-Rosendo and those like him are not out of the woods. They need discretionary relief from Attorney General Eric Holder, who lost this case and may not feel up to granting relief.

“Carachuri-Rosendo, and others in his position, may now seek cancellation of removal and thereby avoid the harsh consequences of mandatory removal,” Justice Stevens wrote. But “any relief he may obtain depends upon the discretion of the Attorney General.”