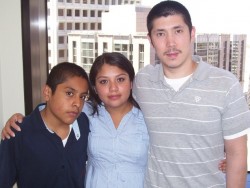 Update: As of 5pm yesterday, ICE was reviewing the case under consideration. Direct all calls and letters in support of Yessica Ramirez here.

Yessica Ramirez was brought to this country when she was 2-years-old, and 23 years later, faces deportation back to Mexico due to a fraudulent immigration lawyer who preyed on her family, swindling them out of $15,000. Her parents have already been deported, she has three younger siblings who are United States citizens, and Yessica is married to a U.S. citizen, with whom she is expecting a baby this August.

Besides expecting a baby and facing deportation, Yessica is in charge of her 12-year-old brother, who has epilepsy and needs special medical care. Her husband Gene does not speak Spanish. If she was deported, her brother Ramon would have to come with her back to Mexico, where he may not get the medical services he needs.

While the first years of school were rocky ones, Yessica always strived to excel academically. She won an Academic Achievement award from President Bill Clinton, she was president of the Latina Mentor Program in high school, and was a member of the Grief Club and the Peer Helping Club. Yessica was also part of ballet forklorico and hosted the news on the local channel to keep parents informed of upcoming activities on campus.

When she graduated from Mills High School in 2002, she enrolled at San Francisco State University to fulfill her general education requirements. Yessica also wanted to join the Army and serve her country, but her legal status was a barrier to both joining the military and continuing her education. She had to drop out of college due to financial reasons and with deportation looming large, could not finish her education.

Yessica and Gene have been married since 2005. Contrary to popular belief, even a legitimate marriage to a United States citizen does not automatically grant someone legal status if s/he was brought here without proper documentation and never had the privilege of a 245-I waiver for illegal entry filed on her/his behalf. In such cases, the undocumented spouse is often deported and slapped with a ten-year ban from returning. The U.S. citizen spouse would then need to file a I-601 waiver and prove exceptional hardship to waive the ban, which is no walk in the park.

Reportedly, Yessica cannot petition for relief through marriage to a United States citizen because she has an outstanding deportation order. Immigration and Customs Enforcement would need to put a stay on her deportation. Please ask ICE to grant discretionary relief for Jessica.

“All I am asking for is the opportunity to live in this country, I don’t want to be a burden, my dream has always been to give back to this country. I want to pursue a higher education not just for myself, but also for my family and for my community. I want to become a social worker so that I can help families and individuals.”