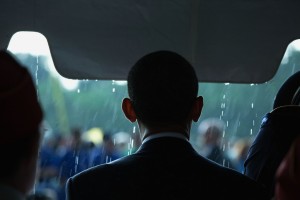 First, the media marveled at how cool and collected Obama appeared on the campaign trail. Now, they’re calling him out for not being angry enough.

Last week, CNN was hammered for pointing out that the President of the United States can’t show emotions like anger, because he would evoke the “angry black man” stereotype. After all, already, there are plenty of white progressives (ironically, not the Tea Party crowd) who are faulting Obama for not being angry — read, ‘black’ — enough.

Bill Maher remarked on HBO last month that “You know, this [BP oil spill] is where I want a real black president. I want him in a meeting with the BP CEOs, you know, where he lifts up his shirt so you can see the gun in his pants.” A “real Black” president? Maher, are you for real?

President Obama won’t be seen rapping in a Snoop Dog music video anytime soon, wearing low-hanging jeans, or talking in Ebonics. But just because the President isn’t displaying any of the above behaviors doesn’t make him any less of a black man.

Maher is not the first one to levy charges against Obama for failing to be stereotypically black. Before Joe Biden was on the Vice-President ticket, even Biden called Obama the first “clean” African-American candidate. Likewise, Senate Majority leader Harry Reid noted how Obama had lighter skin and no Negro-dialect (unless Obama wanted to put one on). As for his part, MSNBC anchor Chris Mathews reported that he ‘forgot’ that Obama was black for a whole hour during his State of the Union speech.

Given that Obama faced an unruly amount of vitriol for simply calling the Cambridge police stupid for detaining Professor Henry Gates Jr. in his own house, acting even remotely out of control is not a wise suggestion for him. But dear liberals and progressives, Obama doesn’t need to be an “angry black man.” What he does need to do is show steadfast leadership on issues of critical importance.

President Obama is an American of mixed-race heritage whose racial identity occupies a complex mixture of geographies. And yet for so many commentators, his biracial identity, culturally hybrid background and economic privileges still aren’t enough to transcend crude ideas of what it means to be a black man in America. That evidence alone is enough to demonstrate that unfortunately, we have yet to enter an era of a “post-racial” America.