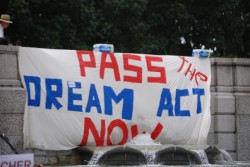 The numbers are in and Americans overwhelmingly support giving undocumented students a pathway to citizenship.

Race in America writer Daniel Cubias finally gets a response to his piece, Why is Anyone Opposed to the DREAM Act? It turns out that an overwhelming number of people think the legislation is a no-brainer and stand strongly in favor of it. According to new survey results conducted on behalf of First Focus, 70% of Americans favor the DREAM Act, a notable increase in support compared to a similar 2004 poll that placed public support at 58%.

Under the DREAM Act, undocumented students would qualify for a pathway to citizenship if they came to the United States before the age of 16, lived here continuously for the past five years, stayed out of trouble, earned a high school diploma or GED, and completed at least two years of college or military service.

A further breakdown of the survey shows that 51% are strongly in favor of the legislation whereas only 19% strongly oppose it. The new poll results also show bipartisan support for the DREAM Act, with 60% of Republicans and 80% of Democrats in favor of it.

Sixty-nine percent of respondents support letting the states — and not the federal government — determine whether undocumented students should get access to in-state tuition. While the proposed DREAM Act does not require states to provide in-state tuition to undocumented students, it would allow states to determine whether or not immigration status should be a factor for determining residency for tuition purposes.

Poll responses are always dependent on how questions are framed. Obviously asking people whether they support “amnesty for young illegals” would garner less support than asking people for their opinion on whether “young undocumented immigrants who have grown up in the United States, stayed out of trouble, graduated from high school and going on to attend college or join the military should get a pathway to citizenship.”

Still, a thorough glance at the framing reveals no indication that the questions stated anything but facts about the DREAM Act. It just makes sense that a super-majority of Americans do support the basic intrinsic value of the DREAM Act: the pursuit of the American dream.