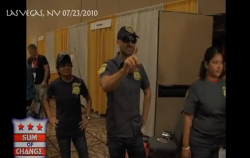 Immigration and Customs Enforcement agents showed up at the Netroots Nations conference in Las Vegas yesterday, complete with retina scanning technology, for one purpose: catch the illegal European invaders staking their claim on indigenous land.

Led by Agent Will Coley, about 10 other immigration advocates dressed up in costume as ICE agents and stood guard at the door to yesterday’s luncheon at Netroots Nations, a gathering of liberal/progressive bloggers and other players in the online world. The simulation was designed to serve as a teaching moment for liberals and progressives regarding the anti-immigrant law (SB 1070) going into effect in Arizona on July 29. The law is designed to unfairly target Latinos and indigenous peoples due to their perceived lack of immigration status.

“We’ve had a lot of illegal Europeans trying to come into the country, they bring all kinds of diseases and ruin the environment. It’s time to put a stop to that.”

At the doors to the luncheon, the mock ICE agents allowed all those who looked to be people of color through the gates, but stopped and asked apparently white Americans for their papers. If they could not produce proper identification, they were subject to more intensive scrutiny.

Most people reacted well and expressed that they were glad to partake in this simulation. However, a few stated that they had no time for these games, failing to realize that the simulation was not just a game, but a reality for many people of color who are subjected to scrutiny and profiling as foreign invaders in their own country. Some even wanted to file assault charges.

“It was degrading. It was incredibly degrading,” said one profiled illegal European invader.

Particularly interesting is how those subjected to additional scrutiny took the fair-skinned mock ICE agents more seriously than the Latino ICE agents. One white American blogger was very upset at being stopped by Agent Carrillo — a queer woman of color — and complained to the organizers of the conferences. Apparently, the 30 seconds of time that it took to partake in the mock interrogation was too much.

Just imagine having to undergo the threat of this type of scrutiny every second of every day. That’s the message we want participants in the Netroots Nation conference to take away from this simulation.

SB 1070 becomes law in Arizona on July 29. The clock is ticking. This is not just a game. It is reality.