Home »Immigration»8 Lessons From "Inappropriate Behavior" for the DREAM Act 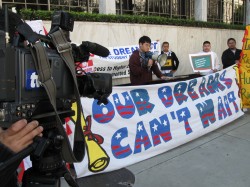 Twenty-one undocumented youth showed extraordinary courage yesterday as they put their lives on the line to conduct a peaceful sit-in for the DREAM Act, which would give them a pathway to citizenship. ,But Congress seems unimpressed and unmoved by the gesture.

Instead of issuing a supportive statement for these brave students, a spokesperson for Senator Richard Durbin — one of the lead sponsors of the DREAM Act — chastised the students by stating that the civil disobedience action “crossed the line from passionate advocacy to inappropriate behavior … Sen. Durbin believes that we will win this fight on the merits, not through public demonstrations or publicity stunts.”

Of course, the spokesperson completely overlooks the fact that momentum for the DREAM Act has been gained through public demonstrations and so-called publicity stunts more than debate over the merits of the legislation. What’s really inappropriate here?

1. How about the way Congress is holding over two million DREAMs hostage, deferring the passage of the legislation for yet another year. If the DREAM Act is indeed popular and meritorious (and we do not doubt that), why hasn’t Congress passed it in the past nine years it has been in existence? Inaction is inappropriate behavior.

2. The fact that Senator McCain is turning his back on DREAM Act students to win a primary challenge from an anti-immigrant contender who is trailing him by more than 20 points.

3. It’s more than inappropriate to keep losing family members and friends to deportation and death, and to have to deal with the ever-present threat of suicide.

4. President Obama promised the DREAM Act as something that could be done immediately. For a constitutional lawyer, his interpretation of “immediately” is quite bad.

5. It’s inappropriate that undocumented students have to risk putting themselves in deportation to convince Congress to grow a pair and do the right thing. (It’s probably inappropriate to expect politicians to have a conscience.)

6. The fact that Senator Schumer and his staffers hold DREAM Act students in contempt, spread rumors in order to divide and conquer immigration advocates, while holding the penning of a comprehensive bill hostage and not taking calls from his own constituency is entirely inappropriate.

7. It is inappropriate for the Congressional Hispanic Caucus to patronize undocumented students by telling them that, while the caucus supports the DREAM Act, it is adamantly set against pushing the legislation on its own merits.

8.  This post is probably going to be read by Congressional staffers and immigration reform advocates and classified as “inappropriate behavior.”

If undocumented student activists are behaving in an inappropriate manner, they certainly learned from the very best teachers in Congress.