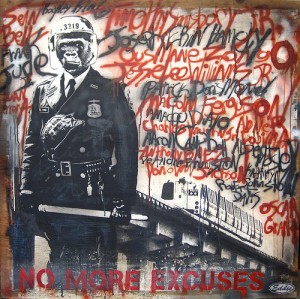 Yesterday, Johannes Mehserle — the former BART police officer who killed an unarmed, handcuffed African-American man in Oakland last year — was given a verdict that stopped just short of an acquittal. As Nadra Kareem has previously blogged here on Race in America, as Mehserle went to trial for killing Oscar Grant, the case received scant news coverage.

That is, until the media picked up the scent of some possible riots brewing in Oakland.

“People just want to get home and be safe,” said an ABC News anchor. Yes, and so did Oscar Grant on New Years Eve but you won’t hear that in the mainstream media.

So what sort of sentence can Mehserle expect to receive, now that he’s been found guilty of involuntary manslaughter? Such a verdict basically translates into a slap on the wrist — a mere 2-4 year sentence. (Maybe the jury can explain what is ‘involuntary’ about shooting someone who’s handcuffed on the ground in the back, but that’s another blog post.)

But does the media care about whether or not justice has been delivered in this case? Not so much.

After all, warning everyone about the possibility of angry people of color spilling out into the streets is somehow much more important than discussing whether the deplorable decision could prompt any reforms within California’s system of law enforcement.

Ironically, the way the media has managed to dehumanize the “angry black people” in Oakland is precisely what helps fuel a cycle in which law enforcement officers end up shooting unarmed black men.

Last night, 400 people took to the streets in a peaceful protest to show their disagreement with a system that continues to fail us. Yet some news stations still chose to salivate about the potential of riots in Oakland, rather than focusing on how peaceful the scene actually was, even as cops with riot gear and rubber bullets stood poised ready to strike and declare martial law. KRON 4 was the worst offender — one of its news anchor grew visibly disappointed about being forced to wait so long for a fight, and actually asked why “people aren’t breaking things as of yet?”

At last, though, the media’s vigil was rewarded when someone broke the window of the downtown FootLocker. The crowds chanted that the action was not a statement, but it went ignored. From thereon, the situation morphed into a media-hyped drama — even though what most people on the streets last night wanted was to express their support of fair play and justice.

The Oscar Grant trial was a chance for a jury in Los Angeles to get it right and show us that the country has moved forward in the area of race relations. Instead, a jury with no African-Americans represented on it decided that Mehserle — a white police officer — was acting involuntarily while shooting Grant as he lay handcuffed on the ground.

Nearly 20 years after police officers were exonerated for beating Rodney King, we’ve learned that southern California juries still aren’t inclined to fully condemn white cops when they’re found assaulting black men, even when their crimes are documented on video. That’s the real media story — the one you won’t hear about on camera.