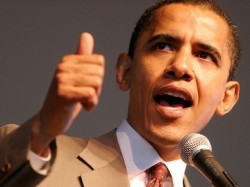 As predicted, the President took the mantle at American University and repeated the usual talking points regarding immigration — border security and an earned legalization program — but offered no timeline for any fixes. He blamed Republicans for obstructing the process, though as Republican Senator Orrin Hatch noted in an interview, Democrats are a solid majority in both chambers of Congress.

Despite being quite the orator, President Obama and his Democrat strategists fooled no one yesterday. VivirLatino blasted national immigration organizations for using the speech as a way to advance their own agenda. Colorlines blogger Daisy Hernandez appeared perturbed that Obama postured as the most reasonable guy in the room while lecturing everyone else about their stance, even though the White House can make some major fixes to the system. Even the mainstream media got it right, as Julia Preston from the New York Times pointed out that Democrats know immigration reform won’t happen till after the elections, so the speech was nothing more than political theater to pander to Latino voters who turned out for President Obama in 2008.

If this is indeed political simulation, what’s next and how do we move forward?

Several representatives and Senators are telling advocates to wait till the lame-duck session. Clearly uncomfortable with the idea, DREAM Act advocates are mobilizing at Capitol Hill this month. Though if we take a look back in history, the 1986 amnesty was also delivered during the lame-duck session, so there’s a chance to finish up advocacy efforts strongly this month while building towards a renewed fight in November.

Still, there is no Republican support for comprehensive immigration reform. In his speech, Obama chided the 11 Republican senators who had voted for reform in the past, but now backed away under the “pressures of partisanship and election-year politics.” The Republican leadership is certainly not going to deliver President Obama a victory on this issue, which he can then use to woo Latino voters. And the Democrat leadership seems keen on “all or nothing,” instead of using incremental measures to break the logjam in Congress.

We’ve been at this place numerous times in the past. The question is whether anyone in Congress and the White House has the leadership and courage to move us forward.