Home »Immigration»The White House Confronts Arizona, But Not About Issues of Race 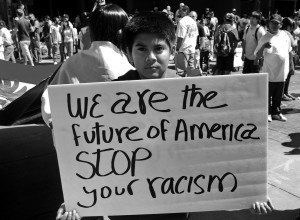 There’s something odd about the lawsuit the Obama administration recently filed against Arizona to challenge the state’s new anti-immigrant law, which gives law enforcement a free pass to conduct racial profiling in order to determine immigration status.

It contains almost no language about race.

Instead, the DOJ lawsuit seeks to invalidate the enforcement of Arizona’s law — because it’s apparently preempted by federal law and also violates the Constitution’s Supremacy Clause, which grants federal government jurisdiction over immigration matters.

Given how Arizona’s legislation (SB 1070) encourages racial profiling of Latinos, it’s surprising that the law isn’t being challenged under the Fourth Amendment, which protects people from unreasonable searches. It’s particularly surprising, because even if the White House wins recognition of federal preemption, such a victory might not invalidate the provision in SB 1070 that requires law enforcement to investigate allegations of immigrants’ undocumented status. Then again, the Obama administration probably isn’t worried about that aspect of the  law, given how the federal government does require and encourage reporting undocumented immigrants.

But while Arizona’s law may be reprehensible, do we really want to support a legal framework that usurps local and state power over immigration matters? Granting federal preemption on immigration, after all, weakens the case for sanctuary city laws, which have helped undocumented immigrants in the past.

Then again, with over 21 states considering legislation like SB 1070, federal control seems to be the lesser of two evils at this point. The  supreme irony here is that the Obama administration is demanding the right to handle immigration matters — and yet so far, it’s been unwilling to actually take action and use that right.

Still, though, why does the Obama administration avoid mentioning race in its challenge to SB 1070? Maybe Obama and Attorney General Eric Holder are being extra-cautious about the risk of right-wing backlash on matters of racial justice. Still, though, such a lapse seems like the cowardly way out — especially for Eric Holder, who once called the country a “nation of cowards” on the issue of race.

Fortunately, Holder has hinted that race may still be a factor in another federal lawsuit against SB 1070. It’s time the Obama Administration stopped running away from race and confronted what’s really at the heart of the issue in Arizona: a race-based hatred of immigrants.