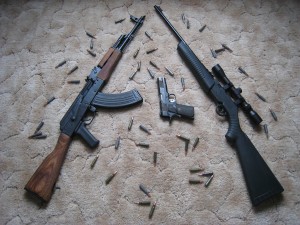 Most Americans support the right to bear arms, but they also want to prevent gun violence in their communities. It’s that simple, right? Not exactly. In fact, it turns out that the country is fairly divided on gun control along racial lines.

In a recent controversial 5-4 decision, the United States Supreme Court dealt a blow to gun control efforts around the country, when it ruled that states and local governments can’t infringe on an individual’s right to bear arms under the Second Amendment.

The case in question dealt with the city of Chicago’s 30-year handgun ban, which the Supreme Court struck down. The city council reacted immediately by crafting a new set of ordinances, including a ban on individuals from stepping outside their homes bearing arms. With lawsuits filed already against the new ordinances and gun ownership organizations looking to challenge ordinances in other cities, we certainly haven’t heard the last on this issue.

Controversy over guns in America isn’t as straightforward as an urban and rural divide. According to a Pew survey, 57% of whites say state and local governments should not be allowed to pass laws prohibiting handguns, while a majority of African-Americans (64%) and Hispanics (61%) say lawmakers should be allowed to pass these laws. Moreover, 67% of Hispanics and 64% of blacks say that controlling gun ownership is more important than protecting gun rights, compared to 39% of whites.

The statistics make sense. Most gun violence happens in communities of color, so blacks and Hispanics are more likely to value gun control. Yet setting up the debate as a choice between “gun control” and “gun ownership” does the entire issue of violence in our communities a great disservice.

Yes, there’s some correlation between proliferation of guns and shootings, but causation has yet to be proved. Economic hardships, drug prohibition, militarism and a warped criminal justice system are the more important contributing factors.

Ultimately, resolving gun violence will require more than simple attempts to regulate gun ownership. But there’s no doubt that a society fed on images of violence and war — as ours has been for years — is certainly more dangerous when armed.