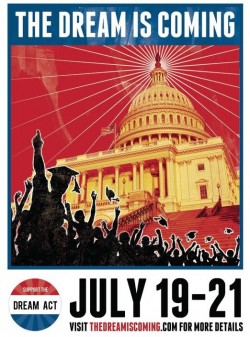 Over 20 undocumented immigrant youth from all over the country are risking arrest and deportation as they stage sit-ins at various congressional offices in Washington D.C. in order to urge congressional leadership to take action and pass the DREAM Act, a narrowly-tailored, bipartisan bill which would grant immigrant youth a pathway to citizenship.

The sit-ins are at the offices of Senate Majority Leader Harry Reid, Senator Menendez (D-NJ), Senator Dianne Feinstein (D-CA), Senator John McCain (R-AZ) and Senator Charles Schumer (D-NY). The immigrant youth participating in the actions today hail from Illinois, Virginia, New York, California, Arizona, Kansas, Missouri, and Michigan. After two months of coast-to-coast actions, including dozens of sit-ins, civil disobedience actions, and protracted hunger strikes by both undocumented youth and community members, they decided to bring the cause of their lives to Washington D.C.

Earlier today, immigrant youth participated in the annual National DREAM graduation event that brought over 500 DREAM Act students to Washington D.C. Advocates hope to see the passage of the DREAM Act this year.

Senator Richard Durbin (D-IL), the original sponsor of the legislation, stated at the graduation event today that “the DREAM Act must be the first step forward in immigration reform,” which is the first time he has made such a proclamation this year.

For everyone who points to the perceived selfishness of DREAM Act students who want to pass the legislation with or without a comprehensive reform, Erika Andiola, a graduate of Arizona State University states has a fitting reply: “My parents sacrificed everything for me so I could pursue the American Dream. To deny my dreams is to deny the dreams of my parents. I’m doing this for them.”

Representative Jared Polis (D-CO), who also spoke at the event, indicated that the legislation can be passed as an amendment to the Defense Authorization bill this year.

At least 65,000 undocumented immigrant youth graduate from high schools every year, and many of them struggle to attend institutes of higher education and the military. The DREAM Act will grant youth who traveled to the United States before the age of 16 a path to citizenship contingent on continuous presence in the country, good behavior, and the attainment of at least a two-year university degree or a two-year commitment to the armed forces.

Take action now to tell Congress to stop delaying the passage of the DREAM Act.