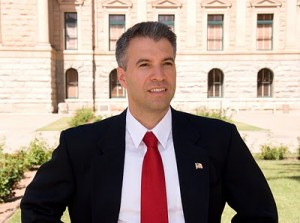 Randy Parraz may look reasonably suspicious in Arizona, but there is no stopping him from being the only Latino running for the United States Senate.

In fact, even though he has yet to win the Democratic primary against the establishment-favored Rodney Glassman, Parraz is already thinking about how to beat John McCain this November.

While Senate Majority Leader Harry Reid (D-NV) is questioning how Hispanics can ever be Republican, the truth is that a record number of Hispanics are running as part of the GOP this year with a real shot at winning. Given that, Randy Parraz is the saving face of a Democratic Party that has yet to deliver on its promises to Latinos.

Parraz, a long-time community organizer, jumped into the race shortly after the passage of the SB 1070 immigration law in Arizona that has made the state ground-zero for a thinly-veiled race and culture war. In an election that is unlikely to inspire many disgruntled Democratic voters to come to the polls, the Randy Parraz for Change campaign is reminiscent of the Obama campaign that brought unlikely forces together based on common values and principles. His resurgent campaign has slowly but surely gained support from Democrats and Independents alike, and he may be just what the Democrats need to turn out Latino voters to the polls in Arizona come November.

More importantly, his candidacy offers Arizona a chance to redeem itself on the issue of race and immigration. The United States Senate has only one other Latino — Senator Robert Menendez (D-NJ). While beating John McCain is an uphill battle, Parraz is confident that his campaign for the United States Senate can turn out Latinos and new voters, changing the electoral make-up of the state.

Still, we must remain wary of community organizers who deride career politicians and promise to deliver change only to act like a part of establishment once elected to office. While Parraz has good values, sometimes these do not change into good policies. If he does win the Democratic nomination, his biggest contribution to the debate in Arizona might be to challenge John McCain on his recent spate of anti-immigrant policies.

Whatever happens in the forthcoming Democratic primaries, one thing is clear: Arizona needs an extreme makeover after its recent fall from grace and for the time being, it looks like Parraz may just be the person to deliver it.