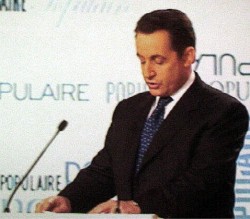 Since hating Muslims was not enough to secure political seats, the President of France — Nicolas Sarkozy — is evacuating the Roma camps and repatriating inhabitants back to Romania.

Called “gypsies” (a derogatory term) by many, the Roma are a nomadic group long scapegoated in many parts of Europe. Due to their wandering lifestyle, the Roma is seen as an group that does not assimilate into society. Hence, they are easily the target of suspicion and xenophobic attacks.

The expulsions are not new. At least 12,000 Roma were deported last year under the guise of security and public welfare. But France is home to 100,000 French Roma and only about 14,000 who are not French citizens. The ruling French party is simply scapegoating the Roma in the midst of an economic downturn and disappointing election results. By deporting the Roma, Sarkozy is courting the xenophobes while effectively blaming the Roma for a host of problems ranging from crime to economic downturn.

Ironically, Sarkozy is the son of a Hungarian immigrant and a Greek Jewish mother and has had his own French credentials under scrutiny. I wonder why it all sounds so familiar and close to home.