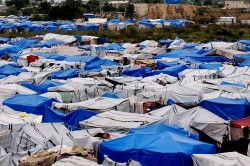 Just when you thought the GOP could not be doing worse on the issue of immigrant rights, they prove you wrong.

Marg Baker, a tea party Republican candidate for Florida State House, says she wants to put undocumented immigrants in internment camps just like the government used to back in the 1940s. And then deport them all.

“We can follow what happened back in the 40s or 50s. I was just a little girl in Miami, and they built camps for the people that snuck into the country, because they were illegal. They put them in the camps, and they shipped them back. We can do that.”

The audience broke out in applause.

Talk about fresh and bold ideas from 1941. She’s alluding to the internment of Japanese Americans during World War II, which is seen as a tragic and shameful part of U.S. history. Congress actually issued an official apology and paid reparations for that wrong-doing, but Baker probably forgot that part of history.

She may also be referring to how the federal government hunted down and deported many American citizens of Hispanic descent during the Great Depression so that white Americans could have jobs.

The point is that Baker was a little too honest in her statement by referring to “detention centers” as camps because that reminds us of a history that we would rather forget as a country. Many undocumented immigrants in deportation, including pregnant women and children, are actually concentrated in internment camps. We just call these tent cities and detention centers nowadays. These prisons are actually rolling in dough due to the criminalization of immigrants. Baker just got a bit off message.

Still, deporting all 11 million undocumented immigrants is quite the fantasy. It’s right up there with the fantasy she harbors about winning an election.