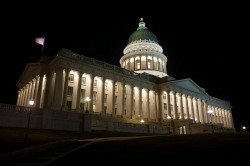 Funding anti-marriage equality campaigns in other states is getting a little unpopular, so the state of Utah has zeroed in on a new target: undocumented immigrants.

Rep. Stephen Sandstrom (R-Orem) unveiled his proposed anti-immigrant legislation last week, which is modeled after the Arizona legislation that requires local police to enforce federal immigration laws and detain people in the country without proper immigration status. Sandstorm claims he has vast support for the bill even though the bill has few cosponsors and other lawmakers have blasted the proposal for various reasons.

Still, his proposal has prompted other Democratic lawmakers to work on their version of the immigration bill. Remind them that Arizona cannot be the standard.

The Arizona-lite proposal would place an unreasonable burden on local law enforcement, diverting resources needed to fight real crime to be used on detaining and prosecuting primarily non-violent immigrant workers. Under such a law, undocumented immigrants are unlikely to report crimes against them for fear of being themselves detained, causing the relationship between law enforcement and immigrant communities to deteriorate. It would also increase the number of unlicensed and uninsured drivers on the road, threatening public safety. In addition, the state of Utah would incur costs involved with housing more non-violent immigrants in jails, verifying whether people are eligible for benefits, and taking care of the families of those either detained or deported.

Sandstorm thinks all the costs are worth the benefits. We all know how Utah is so over-run with undocumented immigrants. There is little space to co-exist in the state. It does not matter that immigrants make positive economic contributions to Utah to the point that “if all unauthorized immigrants were removed from Utah, the state would lose $2.3 billion in economic activity, $1 billion in gross state product and approximately 14,219 jobs.” For lawmakers like Sandstorm, it is easier to demonize workers at the bottom of the totem pole than to go after bankers in Wall Street destroying jobs.

Utah has long struggled with passing an Arizona-lite legislation that would require an apprehension of anyone deemed an undocumented immigrant. SB 81 already allows local law enforcement officials to verify immigration status and enter into 287(g) agreements with federal Immigration and Customs Enforcement. Already, a list containing names and addresses of alleged undocumented immigrants was leaked without much repercussion. Now that is a real crime, but one that people seem less upset about.

This is not about illegal immigration. This is about politicians pandering to a climate of fear-mongering from the extreme right-wingers who are afraid to eat tortillas and dance to salsa music.