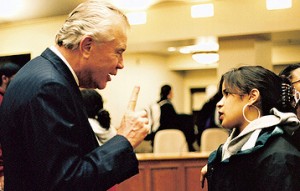 Equal opportunity for people of color and women is under attack.

Opponents of affirmative action, including Democratic Senator James Webb, contend that the practice is unfair, that it leads to preferential treatment, that it relies on quotas, and that it causes reverse discrimination. But in fact, affirmative action is one of the most effective tools for redressing the imbalances caused by our nation’s long-standing discrimination against people of color and women, and for leveling what has been an uneven field for the entirety of our nation’s existence.

We need affirmative action more than ever. A centuries-long legacy of racist, sexist, discriminatory habits, customs and attitudes has not dissipated in the fifty years since the Civil Rights era. Avenues of opportunity for those previously excluded remain far too narrow. Despite a black President in the White House, black men are hardest hit by unemployment. Latino unemployment has reached record levels. Minority families still earn much less than white families. Workers of color are still concentrated in less well-paying, unskilled sectors. The black middle class is shrinking while the black under-class has tripled. This is not the time to abandon programs seeking to redress systemic racial and gender discrimination.

Barriers to equality also remain for women. (White) women still earn seventy seven cents to each dollar earned by men. Gender-segregation prevails in many sectors, barring women from high-wage earning opportunities. In addition, sexism and racism create a particularly difficult double burden for women of color. Those who decry affirmative action for race-based preferences and reverse discrimination should take note that such programs have actually benefited white women more than racial and ethnic minorities.

There exists widespread confusion about what constitutes affirmative action and what does not. Much of this confusion can be laid at the doorstep of the anti-affirmative action movement which has deliberately distorted the goals of this legal remedy. Affirmative action programs do not grant preferences based on race nor do they create quotas.  Affirmative action is an instrument of inclusion, designed to eliminate barriers to equal treatment. It serves as a means of bringing all Americans into society’s mainstream as equal competitors in the race of life.

As President Johnson argued in an eloquent speech trumpeting the program, “you do not take a man who for years has been hobbled by chains, liberate him, bring him to the starting line of a race, saying, ‘you are free to compete with all the others,’ and still justly believe you have been completely fair.” Furthermore, the argument that affirmative action is “unfair” assumes that there is a standard of fairness that has been the province of women or of people of color. Not even the most optimistic or misguided observer of our nation’s history would take that argument in good faith.

Fairness requires ending biased practices, not perpetuating them, and that includes ending the unjust advantages traditionally enjoyed by whites and white men, who are born with a racial privilege. Restructuring a discriminatory status quo to create a nondiscriminatory environment isn’t “reverse discrimination,” but it may feel that way because something is being lost: White people are losing the favoritism they so long enjoyed in a system that discriminated on the basis of color and sex.

An opinion survey shows that most Americans still support the goal of equal opportunity in employment and education. A recent Pew poll showed that while the public decries preferential treatment, 70 percent of Americans support “affirmative action programs to help blacks, women and other minorities get better jobs and education.” And according to Harvard professor Randall Kennedy, one of the biggest triumphs of liberalism is that affirmative action has survived by entrenching the rationale for diversity such that even the right-wing has some value for Clarence Thomas and Michael Steele.

In an ideal society, we certainly would not need programs like affirmative action to redress past and present discrimination. If there aren’t enough chairs in a classroom to accommodate all students, ideally, we should be able to bring in another chair. But as a society, we are certainly not there yet.

African-Americans and Latinos are said to receive undeserved special privileges, when we know that hardly a single white person would be willing to trade places with them today. In the status quo, minorities are still targeted because of the color of their skin or gender or sexual orientation. If we acknowledge the war on drugs, which disproportionately targets young men of color, the wave of anti-immigrant laws, or even the antiquated notions of gender, it is abundantly clear that the solid legal protection from discrimination is one of our only hopes for ensuring the doors of opportunity are open to all.