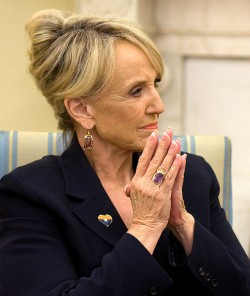 Have you found any headless bodies in Arizona lately?

Appearing on Fox News this past July, Governor Brewer claimed that “our law enforcement agencies have found bodies in the desert, either buried or just lying out there, that have been beheaded.” When asked to show her own documentation, Brewer grew increasingly flustered. Now she has finally admitted in an interview with Associated Press, that she “misspoke” about the headless bodies.

“I misspoke, but you know, let me be clear, I am concerned about the border region because it continues to be reported in Mexico that there’s a lot of violence going on and we don’t want that going into Arizona.”

Actually Governor Brewer, you are still distorting the facts. Our borders are not spilling over with violence from our neighboring country. There’s an overwhelming amount of evidence to show that crime rates are down in border cities and that border violence is mostly hyped. There may be some violence due to drug cartels in Mexico, but thus far, it has apparently not affected Arizona in a way that can justify throwing millions to enhanced border security and racially profiling Latinos.

But could this latest admission have anything to do with the sparkling new video from a pro-immigration organization America’s Voice heralded as the “Worst of Jan Brewer?” (Actually, it might be more appropriate to call it the “Best of Jan Brewer” since she doesn’t get any better that that).

Last Wednesday, Arizona Governor Jan Brewer of Arizona went silent for 10 seconds during a debate with Democratic rival Terry Goddard. Later, she was forced to dodge questions from reporters regarding her erroneous claim that undocumented immigrants beheaded people in the Arizona desert. Her excuse? “All you guys were doing and talking were beheadings, beheadings, beheadings. That is something that has stuck with you all for so long, and I just felt we needed to move on.”

Bingo! We do need to move on but from right-wing lies and distortions concerning immigration. I am glad we can agree on something Governor Brewer.