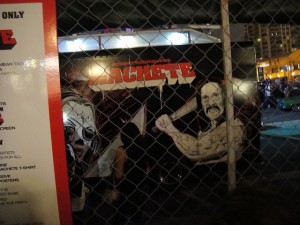 “There are laws. And then there’s what is right,” says Jessica Alba in Machete, the new Roberto Rodriguez flick that hit the cinemas this past weekend amidst much controversy.

As Roberto Rodriguez movies go, Machete is intentionally over the top, edgy, sharp (no pun intended), violent, gory and certainly not easy on the eyes. It’s probably not for the likes of Arizona Governor Jan Brewer who is already paranoid about beheadings in the desert.

Earlier this year, a leaked script pointed toward a race-based war theme in the movie, supposedly vilifying whites and promoting Latino mob violence against them. Machete is not so much about race, as it is about class. The crooks are the capitalists who want to benefit from cheap Mexican labor and denigrate undocumented immigrants to win elections, and they happen to be mostly white. Sorry Roberto Rodriguez, but didn’t you get the memo that a B-grade slasher flick is only appropriate when a white guy or girl goes around killing others? See The American, Kill Bill and so many other Hollywood A-grade flicks.

Machete, played by Danny Trejo, will drive the tea baggers crazy. He is an undocumented immigrant who cannot be deported. He crossed the border; the border did not cross him. He not only steals jobs that Americans want to do but gets the hot girls that should be reserved for American citizens. And heralded as the first Latino action super-hero, he shall never die. Move over Terminator. It’s the ultimate nativist nightmare.

Of course, far scarier than Machete are the white nationalists protesting the movie with their very real machetes. A movie uprising about  undocumented Latinos is so scary.

Machete does pose interesting questions about media representation. The movie ultimately falls into the same trap of Mexploitation that it sets out to criticize. Why are Latinos only depicted as “illegal” immigrants, pregnant teenage girls and welfare mothers, criminals and gangsters in Hollywood movies, and mostly always somehow pose a threat to the dominant culture? With Machete, Rodriguez does not change this picture, even though his approach is a parody on white fear-mongering. But there is some reconciliation in the fact that he does attempt to change the dominant narrative with a successful commercial movie about Latinos with Latino actors in the lead that has crossover appeal.

There are good movies. And then there are ones that should be watched for entertainment value. Machete falls in the latter.