Home »Immigration»Congress to Take Up DREAM Act with Defense Bill 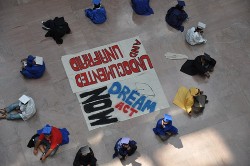 The cat is out of the bag: Senator Harry Reid will propose the bipartisan DREAM Act as an amendment to the Defense Authorization Defense bill next Tuesday. Finally.

The DREAM Act would allow certain undocumented students who have lived and grown up in the United States a chance to apply for legal residency if they fulfill certain requirements and have no criminal record. Recent polling suggests that 70% of Americans are in support of the bill.

After several months of frustration and dimming prospects for comprehensive immigration reform this year, the announcement from Senator Reid late yesterday afternoon gave immigrant youth and allies across the country a renewed sense of momentum and energy. Now that’s what a down-payment looks like — full of promise and hope for the future.

Despite this positive announcement, the legislation still needs to reach a threshold of 60 votes in order to make the amendment so there is no cause to celebrate yet. Start calling. Emailing. Faxing. If you have called already, call again.

While Senator David Vitter (R-LA) is characteristically misrepresenting the DREAM Act as an amnesty that gives in-state tuition to undocumented students, what the legislation does is restore power to states so that they can make their own rules regarding the establishment of residency for tuition purposes. You’d think that tea-baggers like the Tenth Amendment, but not when it comes to immigrant youth.

The inclusion of the DREAM Act in the defense bill does not make the anti-military opponents of the DREAM Act happy, and many would point to it as a confirmation of their claims that the DREAM Act is a conspiratorial military draft. In reality, key DREAM Act advocates have  known for quite a while that the only way to pass the legislation this year is to attach it to the DOD bill as part of an amendment process.