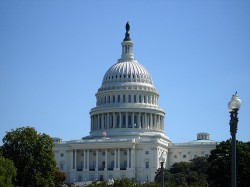 With Congress back in session, controversial issues such as immigration reform are likely to be swept under the rug. It’s widely believed that Latinos and other disenchanted Democratic voters will be staying at home this November due to the inability of Democrats to deliver any real change. Politico reports that immigration reform advocates are expected to only have about 30 supporters for comprehensive immigration reform after the midterm elections. Advocates have already lost Republican moderates such as Lisa Murkowski who supported immigration reform at one time. Other swing votes retiring include Judd Gregg of New Hampshire, Bob Bennett of Utah, George Voinovich of Ohio, and Sam Brownback of Kansas.

On the Democrat side, Senator Michael Bennett (CO) and Blanche Lincoln (AR) look poised to lose their seats to anti-immigrant opponents. And rumors are even circulating that the champion of comprehensive immigration reform — Luis Gutierrez — may just chose to not run for re-election because he has his eyes set on the seat of Mayor of Chicago. For now, it looks like not showing up to vote this November hurts immigrants more than voting, though it’s not like Democrats have done anything to advance immigration reform even with a sizable majority.

Political pundits would say that for immigration reform to prevail in the Senate anytime soon, it would require any proposal to move more towards the right or Republicans to change their political calculation due to an increased possibility of bipartisan compromise. This also means that a pathway to legalization for all undocumented immigrants looks highly unlikely unless advocates can build the moral conscience and discourse necessary for most Americans to see it from the lens of social justice. In this bad economy where immigrants are scapegoated for everything from lost jobs to climate change, prospects certainly look dim.

But that is where advocates come in — to change the existing political reality. Today and tomorrow the Reform Immigration for America campaign will be lobbying Congress as it gets back into session for what appears to be a final push for immigration reform before the midterm-elections. Next week, immigrant youth will take on Capitol Hill again. The fight is long from over.