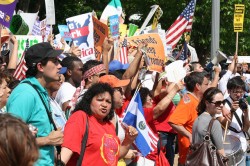 It looks like the carefully calculated political move by Senator Harry Reid to bring the DREAM Act up for a vote before the midterm elections may just help his re-election battle after all.

The latest tracking poll from Latino Decisions confirms that 77.5 percent of Latinos support the DREAM Act, with only 11.5 percent opposed to the legislation. Approval of how Barack Obama was handling immigration reform also jumped by 6 percentage points during the week that DREAM Act was up for a procedural vote. Additionally, immigration and the economy continue to be primary concerns for Latinos voters as they head to the polls.

Latinos also increasingly see Republicans as obstructionists to immigration reform, which does not bode well for the GOP in future elections. Seventy-three percent of Latinos see the GOP as the party blocking immigration reform as opposed to 54 percent. And Latino voters in California are still not embracing GOP candidates despite heavy outreach.

I would argue that both parties are more or less equally culpable for ignoring immigration reform — the Democrats for not having a moral calculus on the issue and the GOP for selling out to the more racist elements of its base. But if I were a Democrat running for re-election and in a geographic district where Latino voters were registered in double digits, I’d be showing Spanish language ads with Republican opponents making speeches opposed to immigration reform.

However, it may be too little too late. Latino Decisions does note that a relatively stable 53.1 percent of Latinos said they will vote Democrat compared to 20.4% who will vote Republican, with a large percentage still stating undecided. And as Art Levine at Truthout points out, the DREAM Act solidifies Latino support for Democrats, as long as they are not prevented from voting.