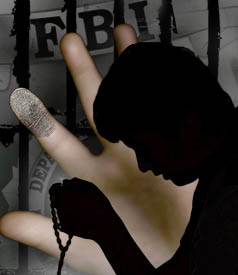 Nine years after 9-11, we can safely say that using immigration as a proxy for anti-terrorism efforts has only hindered us and set as back as a country.

Islamophobia has gripped the nation in recent months leading up to 9-11-10 in a manner reminiscent to the Muslim-bashing climate in the aftermath of 9-11-01. The hatred and perpetual foreignness attributed to American Muslims is part of the larger climate of fear and hatred faced by immigrants in the post 9-11 era.

9-11 marked the convergence of criminal and immigration law as a way for the government to combat terrorism. Anti-immigrant racism was channeled through the rhetoric of anti-terrorism. Overnight, we changed from a nation of immigrants into a nation of suspects. Former Attorney General John Ashcroft revised INS detention rules to detain non-citizens for longer durations without charging them for a crime. Thousands of  Arabs and South Asians with Muslim last names were detained indefinitely and many more denied visas. Immigration came under the control of the newly established Department of Homeland Security, which was mostly ill-equipped to deal with it.

With stringent border controls, military-style ICE raids, increased detention, and deportations as punishment, immigration law imported retributive criminal enforcement methods, while not really enabling procedural rights to those charged with violating laws. Illegal status is not a crime, but it is certainly treated in a criminal manner with deputized police officers playing ICE agents in many states. Instead of challenging the rapidly deteriorating rights of immigrant workers and trying to change the problematic discourse, national immigration groups reinforced the “get tough on immigration” rhetoric. It didn’t get us far.

Nine years after the attacks, we are still trembling with a fear and hatred that has captured the country in a particular time capsule, unable to overcome and move forward. We are contemplating going back to 1868 to debate birthright citizenship. Some Republicans were unwilling to vote for a health care bill for those who reacted to the tragedy with total disregard for their own safety only because it may benefit some undocumented workers. Muslims are now type-casted as a race, and face more hatred than ever before in American history. The alienation and persecution of immigrants, and especially Muslims and perceived Muslims, has done nothing but foster a false sense of security while providing more recruitment fodder for anti-American groups.

The Obama Administration is unwilling to turn the tide back towards treating immigration as a civil matter, although DHS has sent some positive signals in the past few months. We didn’t burn Korans as a country this weekend, but we have certainly abrogated parts of the United States Constitution and destroyed the moral fabric of this country. If they really hated us for our freedoms, they did win after all.