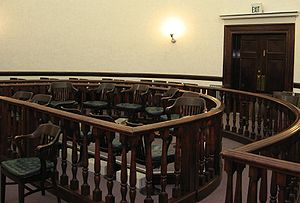 Should a juror be allowed to return a non-guilty verdict even if s/he is convinced that the defendant is guilty of the crime in question?

Such a move is called jury nullification. It may be a misleading term for it implies a nullification of the law. Not quite. The Fourteenth Amendment guarantees all persons due process and equal protection of the laws, and this has been applied to also mean that any person charged with a crime is afforded a jury of her or his peers.

George Washington Law professor Paul Butler argues that in some cases, the race of a black defendant is a “legally and morally appropriate factor for jurors to consider in reaching a verdict of not guilty or for an individual juror to consider in refusing to vote for conviction.” He reached this conclusion while working at the U.S. Attorney’s office, and recounted a particular experience in his book, Let’s Get Free: A Hip-Hop Theory of Justice, where Butler admits that he was arrested, charged, and went to trial for simple assault in D.C. Superior Court, and how a D.C. cop took the stand and lied. Thankfully, the jury acquitted him of charges. That’s how Butler observed that sometimes, a black juror would not send another black man to jail even when the “evidence” was stacked against the defendant.

It’s certainly a controversial opinion that has many critics, especially those who claim that such an approach is disrespectful to the letter of the law. But laws are not made and applied in isolation of human experience and conscience. If all the jury had to do was apply the rule of law based on the facts, then criminal justice could be done through computers with input and outputs to fulfill the function of a “fair and impartial” jury. The framers of the Constitution considered jury nullification by law to be one of the defenses against government encroachment on individual liberty. By a logical extension, there is nothing wrong with allowing African-American and Latino communities to adjudicate matters according to their own standards especially when the traditional criminal justice system has certainly done them disproportionate dis-service.

Of course, there are limitations to race-based jury nullification. It doesn’t tell us what to do when the perpetrator is white and the victim black, as in the case of the controversial Oscar Grant trial. It also assumes that just because someone is a member of a minority group, s/he is more than likely to deliver an acquittal based on race, which is not necessarily true. There’s also a danger in entrenching identity politics into our sense of justice, but the system already privileges one race over another.

After all, flexibility and crime nullification is already afforded to the most privileged in our society, ranging from the architects of torture memos to the finance crooks at Lehman Brothers and AIG to the environmentally-destructive BP. These people should face criminal charges for destroying so many lives, but they have a certain privileging. In the meantime, another black teenager will go to prison for marijuana possession and along with other imprisoned marijuana users, cost taxpayers $1 billion per year.

I certainly don’t want non-violent drug offenders and prostitutes in prison. I am astounded by the fact that one in every 100 Americans has been incarcerated. And I cannot wrap my head around the increasing criminalization of immigrants and asylum seekers.

It essentially boils down to what sort of criminal justice system we want in this country. Do we want a criminal justice system based on punishing every violation of the law, even when the law does not make much sense? Or do we want a system that is flexible and affords a jury of peers some right to change the outcome of a trial based on what seems fair to their community?

Instead of arguing for race-based jury nullification, what we want is a more fair application of laws when it comes to minority groups. That’s the least we can do to put the aspect of justice back into our system of criminal justice.