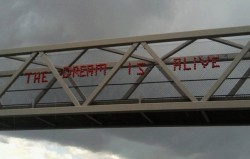 After the failed cloture vote on moving forward with the National Defense Authorization Act, which also meant that the DREAM Act would die as an attachment without even a vote, it took less than 24 hours for Senator Richard Durbin (D-IL) to resuscitate the bill.

Of course, the legislation, now S. 3827, is won’t come up for a vote until after the lame-duck session. And even then, it may not bear any fruit. That does not mean that undocumented students and their allies will give up the fight.

The effort to pass the DREAM Act with the Department of Defense legislation was a trial run. No one really expected it to pass, but the response was clearly better than 2007. Advocates were more organized and estimated that more than 350,000 calls, emails and faxes went to Congress in support of the DREAM Act within a matter of days. We strengthened the relationship between the LGBT community and immigrant rights advocates. And we’ll keep getting better and closer with practice, till we eventually pass the DREAM Act.

Sometimes, it may seem like we are Sisyphus, burdened with the task of rolling a boulder uphill, and always failing. But there’s another lesson to draw from the failure of this Greek tragedy. That uphill battle symbolizes the journey of life, and it is supposed to teach us valuable lessons on how to move forward.

It’s really not a matter of if, but when that happens. As Senator Durbin told DREAMers across the country, “don’t give up on your dreams.”