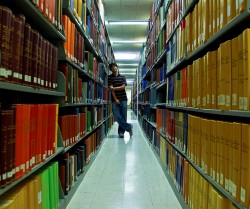 On the heels of South Carolina, some colleges in Georgia are considering a proposal to ban undocumented students from higher education.

North Carolina also tried this in community colleges last year, realized it was losing money and repealed the ban. But the Georgia proposal is creative. University of Georgia, Georgia Tech, and other public colleges would only ban the students if the schools do not have the space to admit all academically qualified applicants.

How many undocumented students are “invading” the state of Georgia? The university system estimates that 501 students out of 310,000 attending the 35 campuses are classified as undocumented. The numbers are potentially much lower because many of these are probably United States citizens who have not submitted the required paperwork.

So lets get this one straight. The University of Georgia system is so concerned about the prospect of undocumented students taking seats away from other academically qualified applicants that they are looking into banning less than half of one percent of their students or prospective students from the system? And a committee was convened to explore this option as a viable possibility to improving access to higher education?

Besides the fact that the impact of undocumented students on Georgia schools is limited, there’s also a fallacy in assuming a strict divide between between having documentation and not having paperwork. Sam Chun is a junior accounting major at a University of Georgia and admits that he used to be undocumented. “I just got my citizenship when my dad got his six years ago. I was like everybody else playing around as a kid and studying like everybody else, so just a document didn’t really separate me as a person from everybody else. The school should give a chance for those that don’t have the privilege to be educated.” How can anyone possibly say that students like Chun should be denied a chance to access higher education?

It’s unfortunate that those entrusted with improving access to higher education in Georgia are taking the view that excluding certain students is the way to serve Georgia better. It doesn’t make sense. If there’s not enough space for equally qualified students, bring in another chair. If that doesn’t help, build another school. At the end of the day, education is an investment.