Home »Immigration»Who Will Democrats Throw Under the Bus? 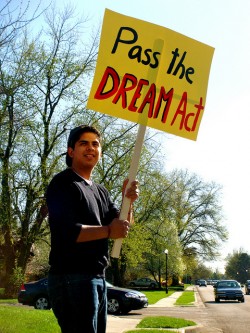 Pro-choice, LGBTQ, and immigrant rights advocates all have their eyes set on Congress for today’s vote on S. 3455, the Department of Defense Authorization Act for Fiscal Year 2011. It turns out that they all have something on the agenda, and know that their issue may just not make it to the final bill.

A repeal of Don’t Ask Don’t Tell is supported by 80 percent of Americans while the DREAM Act has the support of 70 percent. Permitting abortion services at taxpayer funded military bases, meanwhile, does not muster majority support. And that may be the amendment that Democrats eventually leave out from the final defense authorization bill.

For the DREAM Act, nonetheless, there are significant procedural hurdles. The Democrats have to ensure that they can override a GOP filibuster, as in a motion to invoke cloture or shut down the debate on the Defense Bill. If they are successful, they may have the votes to adopt the DREAM Act as an amendment. Majority Leader Harry Reid needs to keep the poison pill amendments out, such as e-verify or stripping the DREAM Act of its education provisions, or only adopt the ones that he knows would fail the final test. And finally, they still need 60 votes to pass the bill — with many amendments — through the Senate.

But that would not be the end of the trials for many undocumented youth whose hopes hinge on the legislation. Even if the DREAM Act can pass through the Senate, it would still need to muster enough votes to face the test of the conference committee that would take it up in the lame-duck session. No one can predict with precision what could happen in a lame duck session. Democrats may just lose enough House seats, blame the Republicans for stripping the final bill of the DREAM Act, and exploit the issue in order to garner high Latino voter turnout in 2012. And voters may or may not punish them at the polls.

Even if I’m being overly cynical at this point, the passage of the DREAM Act only signals the first victory. It is up to USCIS to administer the bill and there is serious doubt that they could do so in a way that measures up to the true promise of the legislation. It is far more likely for several provisions of the bill to end up in litigation.

Support is  in from all corners. Lady Gaga is singing her heart out in Maine, Ricky Martin is tweeting to end discrimination, and Perez Hilton blogging in support of the DREAM Act.  And Lieutenant Dan Choi tweeted in his support for the DREAM Act early this morning that “our dreams and realities are inextricably linked … because the American promise is for all.”

Still, the fact that the Senate is even considering the DREAM Act is nothing short of a miracle. It has taken almost three years of organizing since the DREAM Act failed to override a filibuster in 2007 to get back to the starting point for another vote. Last time, I was fresh out of graduate school. This time, I’d be sitting in a law school classroom a few blocks from where legislators would ultimately decide on the humanity of my friends. Organizing for the legislation has been like throwing pebbles into the sea and hoping the ripples spread far enough or turn into waves that reach the other side. I’m not sure we’ve reached there yet but I’m confident that Dreamers will keep fighting for their right to live and become productive citizens in the only place they call home. Actually, most of us don’t know how to live any other kind of life.

This afternoon, at around 2:15 p.m. EST, the Senate will cast its first vote on the DREAM Act.