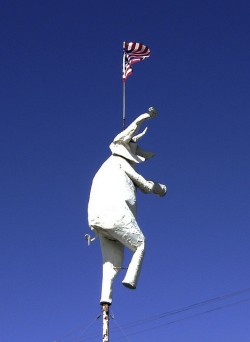 While veteran and once-maverick GOP senators such as John McCain have lost their grip on reality, military veterans such as Colin Powell are declaring their support for the DREAM Act.

On NBC’s Meet the Press, Colin Powell stressed that the Republican party should not adopt an anti-immigrant stance.

“Fifty percent of our minority kids are not finishing high school. We’ve got to invest in education. We should use the DREAM Act as one way to do it,” said Colin Powell on Meet the Press.

The former Chairman of the Joint Chiefs of Staff, Powell is not alone in his support for the legislation. In a press conference held by America’s Voice, several former military officials also expressed their support for including the DREAM Act with the National Defense Authorization Act, because it would allow talented and patriotic young people to adjust their immigration status in order to enlist in the U.S. military and serve the only country they know as home.

Major General Alfred Valenzuela (Ret.), the highest-ranking active-duty Latino officer before he retired in 2004, stated that even those DREAM Act students going the education route would be required for civilian positions in the United States military. Louis Caldera, former Director of the White House Military Office and United States Secretary of the Army, stated that he had no doubt that “many of these enlistees will be among the best soldiers in our Army.”

Note here that the former Bush Administration also expressed support for the DREAM Act before eventually threatening to veto the legislation. There is no risk of President Obama doing so — in fact, Obama has pledged to make calls in support of the DREAM Act. Time will tell whether the President keeps his word, given that he has broken promises to immigrant communities with a record level of deportations. However, the Democrats seem to be playing their cards right at the moment and moderate Republicans are under immense pressure to support the bipartisan legislation.

Unfortunately, since the GOP has been hijacked by extreme right-wingers who want to take back this country from a black President, the moderate and business-minded wing of the Republican party has gone into hiding. Twelve Republicans voted to support the DREAM Act in 2007 and only 7 remain: Orrin Hatch and Bob Bennett (R-UT), Sam Brownback (R-KS), Susan Collins and Olympia Snowe (R-ME), Kay Bailey Hutchinson (R-TX), and Richard Lugar (R-IN). Besides long-time DREAM Act co-sponsor Senator Lugar, no Republican votes are secure for the motion to add the DREAM Act to the DOD bill on Tuesday.