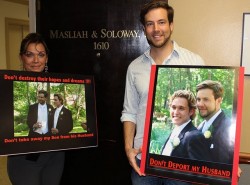 When Joshua Vandiver, a doctoral student at Princeton University, met his husband more than four years ago, he never thought that he would have to fight tooth and nail to keep him in the country.

Gay and lesbian American citizens are excluded from family-based immigration laws, even when they are legally married. While opposite-sex binational couples routinely marry and obtain permanent resident status for the foreign spouse, this is impossible for gay and lesbian couples. As a result, 36,000 same-sex binational couples are unable to live together in the United States and need the passage of legislation such as the Uniting American Families Act (UAFA) in order to stay together.

Joshua Vandiver and Henry Velandia married in Montville, Connecticut, on August 29, 2010, but unlike a typical heterosexual couple, Josh could not file for legal residency for Henry, who was born in Venezuela. Henry came to the United States legally in 2002. He is a salsa dancer and teacher, performed on Univision’s Mira Quien Baila, and is the founder of HotSalsaHot dance school. His application for a work visa was later denied and current visa expired, which puts Henry at the risk of deportation away from his family and community.

On November 12, 2010, Josh and Henry will celebrate 4 years together as a couple. In late November, Henry has to appear before an immigration judge in New Jersey and be given a final order of deportation. His crime? He fell in love with a United States citizen and dared to dream of having a family with his partner in this country.

The couple has not taken this sitting down. Together, they hosted an event at Princeton to rally local support, spoke to their Congressional representative and  formed a Facebook page called “Save our Marriage – Stop the Deportation of Henry Velandia” that is gaining increasing support daily.

The Department of Homeland Security can easily exercise their discretion and halt the deportations of same-sex immigrants who are partners and spouses of United States citizens and legal permanent residents. His Senators can also sponsor a private bill to keep Henry Velandia in the country or grant him humanitarian parole. Urge the Department of Homeland Security and Senator Menendez to stop the deportation of Henry Velandia and other same-sex binational couples in the same situation.