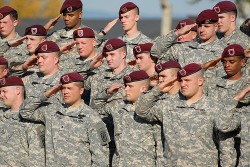 The reward for serving your country may not be a medal if you are an immigrant.

Rohan Coombs was brought to this country legally from Jamaica at the age of nine. He signed up to serve his adopted country by joining the U.S. Marine Corps and served his nation in Japan, the Philippines, and the Persian Gulf during the first war with Iraq. While in the military, Rohan filed for his citizenship, but he was told “you are property of the United States Government, that makes you a citizen.” He did not take any further action. If Coombs had died while serving, he would have received posthumous citizenship and a military funeral. Instead, he succumbed to the horror of losing his friends during the war in another manner: Coombs started taking drugs as a way of dealing with post-traumatic stress and he was given a dishonorable discharge. At the time, however, he did not know that he would face deportation from the country he had served.

It turns out that many immigrants who serve the United States in a time of war are not receiving a hero’s welcome home. As many as 17,000 non-citizens serve in the armed forces and it is estimated that up to 4000 veterans are facing the punishment of detention and deportation. The mainstream media has finally caught on to the story of these banished veterans, who are being detained and deported after their service to their country.

The culprit here is actually the 1996 Illegal Immigration Reform and Immigrant Responsibility Act (IIRIRA), signed by President Bill Clinton. Under the legislation, minor offenses such as shoplifting can make a legal permanent resident eligible for deportation. Oftentimes, this means that immigrant veterans like Coombs find themselves in deportation because their need for proper medical attention for post-traumatic stress goes unfulfilled. Coombs was busted for marijuana possession in 2001 and while he served 8 months in prison, under the IIRIRA, that means deportation to Jamaica, a country he left behind as a kid. It is cruel and unusual punishment and it must come to an end.

Our veterans deserve far better than this country is giving them. There are several options on the table. Rep. Bob Filner (D-C.A.), chairperson of the House Veterans’ Affairs Committee, is looking into changing the law so that immigrant veterans are not deported to homes they do not even remember. The Department of Homeland Security can also exercise discretion and grant deferred action to all veterans in similar situation. That is something all, if not most, Americans can hopefully agree on, even in these increasingly partisan times.

Coombs has appealed to the Ninth Circuit, and the courts may be more willing to deem his deportation as “cruel and unusual punishment.” Some 4000 immigrant veterans are perusing the immigration courts to get out of detention and stay their deportations. Something tells me that is not the best use of our taxpayer dollars.