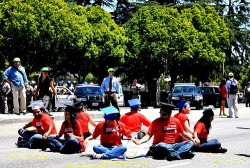 Los Angeles City Attorney Carmen Trutanich has lost his marbles. His office is levying felony charges against the nine U.S. citizen student protesters for the DREAM Act who blocked traffic on Wilshire Boulevard this past May.

The nine UCLA students risk spending up to one year in prison plus additional community service time for their peaceful civil disobedience action. These young students sat down near the federal building on Wilshire Boulevard to show their support for the federal DREAM Act, a legislation that would give many of their undocumented youth friends a pathway to citizenship. The shutdown was symbolic because not just the traffic, but entire lives are disrupted because Congress has failed to take action on the DREAM Act.

The California Highway Patrol gathered as 150 protesters demonstrated on Wilshire Boulevard. They allowed the demonstration to continue for more than two hours and then detained six female and three male students after they refused to disperse. The students were taken to a CHP station, cited for refusal to disperse, and then released. That should have been the end of their punishment for holding up traffic. But City Attorney Carmen Trutanich has other plans for the UCLA students. He wants them in prison. Maybe it is his way of extracting revenge as a USC-alum.

The Los Angeles City Council and surrounding cities voted unanimously for a resolution supporting the DREAM Act and Mayor Villaraigosa recently called on Congress to pass the legislation. It is not too much to expect city officials to stand in solidarity with the DREAM Act youth and respond to the outrageous charges that the UCLA students are facing at the hands of City Attorney Carmen Trutanich.