Home »Immigration»Can AB-540 Serve as the Prop 8 of the Immigrant Rights Movement? 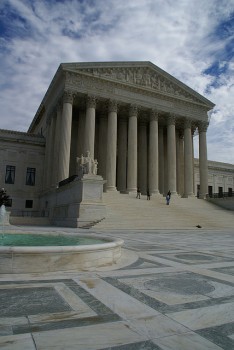 Anti-immigrant attorney Kris Kobach had his day in the California Supreme Court on Tuesday, arguing that a 2001 state law (AB-540) that provided in-state tuition benefits to long-time California residents was actually illegal under federal law.

The famed architect of Arizona’s racial profiling law, Kobach has repeatedly tried to eliminate the right of states to set their own residency laws with regard to tuition (so much for Republicans believing in states rights), and failed on every occasion. He failed in his own state of Kansas in Day v. Bond. Then he took his cause to Utah where he was once again defeated by the rule of law. Now he is suing over a few dozen undocumented students at the University of Nebraska. But he finally had a lucky day in the 3rd District California Appellate Court, which handed him his first victory.

Section 505 of the Illegal Immigration Reform and Immigrant Responsibility Act of 1996 (Title 8, Chapter 14, Sec. 1623(a)) is the statute at issue and it reads: “an alien who is not lawfully present in the United States shall not be eligible on the basis of residence within a State (or a political subdivision) for any postsecondary education benefit unless a citizen or national of the United States is eligible for such a benefit (in no less an amount, duration, and scope) without regard to whether the citizen or national is such a resident.”

That AB-540 confers a benefit on undocumented students not available to citizen students is not without merit. While never using words like residence or residency, a three-year high school attendance requirement to qualify under the law does create a surrogate residency. And the counsels for the Regents of California would have to reach really hard to prove that in-state tuition is not really a benefit.

But Kobach and his anti-immigrant funders face two major obstacles. The first one is that in-state tuition laws such as AB540 actually benefit out-of-state United States citizens on more occasions than undocumented students. A person can complete three years of high-school in California, graduate and move out of state for a while, and still be eligible for in-state tuition when they get back to California. That makes sense from the point of view of the state — a family domiciled in California makes contributions to state coffers during the time that they live here so they should be able to claim tuition breaks.

A second problem for all parties in this case is that, win or lose, the case will likely be appealed to a much more conservative United States Supreme Court. The court could affirm the ruling and refuse to hear the case as it did in upholding the decision of the Kansas Supreme Court. But if SCOTUS agrees to hear the case, AB-540 would remain the law of California. And if the DREAM Act passes while SCOTUS is waiting on hearing the case, Kobach and his friends would have absolutely no cause for action, since the statute they are relying on would be invalidated by the legislation.

Maybe the California Supreme Court striking down AB-540 is the wake-up call required for immigrant communities in the most immigrant populous state. It could just be our Prop 8, and give us the momentum necessary to finally pass the DREAM Act. We’ve less than 90 days to find out.