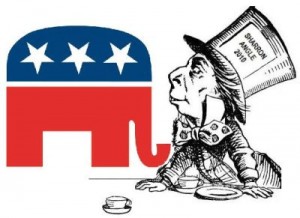 In Sharron Angle’s Nevada, the good people are white and the bad ones are dark-skinned.

At least that is the message I gathered from her latest TV ad. In her bid for the Senate seat now held by Majority Leader Harry Reid, Angle attacks Reid for his support of undocumented students.

Without referring to it, Angle is attacking the bipartisan and popular immigration measure called the DREAM Act, which would give certain undocumented students raised in the United States a pathway to citizenship provided they fulfill some stringent requirements. The ad juxtaposes a group of white college students in graduation robes with an image of scowling Latino men either standing around or crossing the border. Clearly, they are so threatening that Andrea Nillis in the WonkRoom has noted that DREAM Act students look more like the students in robes than the thugs.

This is not the first time Angle has pulled such a stunt. In September, Angle released an ad accusing Reid of being “the best friend an illegal alien ever had,” which received condemnation from even Tibi Ellis, the chair of the Nevada Republican Hispanic Caucus.

Undocumented students are now the new Willie Hortons. But something tells me that this latest racially-tinged ad will not make a Dukakis out of Harry Reid. Over 12 percent of the electorate in Nevada are Latinos and turnout has grown 164% from 2000 to 2008. Angle may just be delivering the Senate seat to Harry Reid on a silver platter.