Home »Immigration»Obama Puts DREAM Act Off for Next Legislative Session 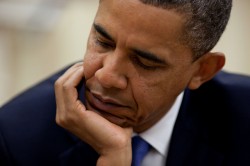 Speaking at a townhall last night, a Georgetown University student asked President Obama what he was doing to make the DREAM Act a reality for the many undocumented immigrant students who, unlike him, are not privileged enough to attend college.

Obama gave his usual stump speech on the legislation, calling it a “concept that was central to the American story” of immigrants integrating, assimilating, and rising up in society to become part of the American fabric. “We’ve now got a group of young people in this country who for all practical purposes are American. They grew up here, gone to school here. They don’t know anything other than being American kids.”

Many of those DREAM-Act eligible kids are now adults, struggling through college or seeing the doors to higher education shut on their faces and becoming part of the perpetual underclass much like their parents. While Obama told the audience that he was optimistic that we could get the DREAM Act passed in the next legislative session, immigrant rights advocates are not so sure about that possibility.

Punting the DREAM Act to the next legislative session means that it would most likely remain a dream for quite a while, unless Obama really meant the lame-duck session. Democrats have 61 days to pass legislation after the elections before a fortified Republican Congress sweeps into power. While the DREAM Act has always drawn bipartisan support, that is not a good sign for securing a legislative victory. If Republicans take control of both the House and Senate, they are unlikely to give President Obama any short-term victories for his own re-election bid.

But if Democrats could not get much done with 60 senators, it is unlikely how much they can get done after heavy losses from voters. The prospects are bleak, but that does not mean that undocumented students would give up trying to make their DREAM a reality.

Americans can be quite stubborn for all practical purposes.