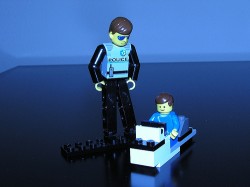 Digital natives and digital immigrants beware! The United States Citizenship and Immigration Services (USCIS) is using social networking sites such as Facebook and Myspace to obtain information on potential visa beneficiaries. And apparently, they do not need a warrant for their brave new world policy.

Gone are the days of law enforcement and immigration officials bursting through your doors with (and without) warrants. As our lives become increasingly digital, investigations will be conducted through a few clicks of a mouse.

With the inauguration of Barack Obama, the Department of Homeland Security (DHS), started snooping around online to protect the President. The immigration arm of Homeland Security, USCIS, later authored a memo directing its officers to make use of social networks such as Myspace and Facebook to adjudicate the cases of immigration visa beneficiaries. Electronic Frontier Foundation (EFF), the San Francisco-based civil liberties group, obtained the documents on this through the Freedom of Information Act (FOIA) as part of an ongoing lawsuit against six federal agencies over social network surveillance.

According to the memo, officers should use social networks to observe the daily life of beneficiaries and petitioners who are suspected of fraudulent activities, such as entering into a sham marriage or expressing intent to stay in the United States beyond the duration of a student visa. But the memo does not stop at simply directing officers to check out blogs, tweets, and profiles. No, it encourages immigration officers to befriend unsuspecting users online in order to extract potentially relevant information.  What does this mean? For one, USCIS officers now have more of an excuse to spend time browsing the internet and chatting on Facebook, courtesy our taxpayer dollars.

On a more serious note, big brother (and sister) is certainly watching and it is completely legal. Welcome to the 21st century version of immigration raids. The agency does not need to obtain a warrant because “using MySpace and other like sites is akin to doing an unannounced cyber “site-visit ” on petitioners and beneficiaries.” Social media is already changing the face of jury instruction. Information on Facebook and Myspace can be subpoenaed for both civil and criminal cases, muddling privacy law. And it may be too late to retain control of anything you may have posted online.

Here is a word of advice in the meantime: Do not approve friend requests from people you do not know and keep that Twitter account locked.