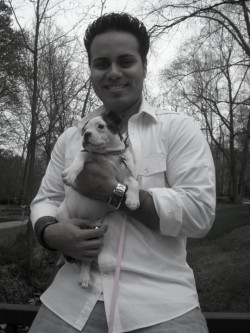 Change.org users have pulled a hat-trick with this latest victory: Fredd Reyes is out of detention, making three victories today.

Twenty-two years ago, a family fled political persecution and threats of violence in their native Guatemala, and arrived in the United States with their two-year-old son, hoping for a better future. After twelve years of waiting, their petition for asylum was denied. Ten years later, Immigration and Customs Enforcement pulled their son Fredd, now 24 years old, from his sleep on the day of his exams at Guilford Technical Community College and put him in an inhumane detention facility in Georgia.

Immigrant rights advocates across the country were not about to let Fredd, a talented young singer and actor, spend Thanksgiving in detention. With over 3500 emails in support of Fredd Reyes pouring in from all over the country, ICE relented and released him a few minutes before the North Carolina DREAM Team held a press conference on his behalf.

Even though Fredd is on his way home, the fight is not yet over. As Fredd, Jennifer, and Bernard celebrate Thanksgiving with their families, thousands of other young people like them are sitting in detention facilities across the country, awaiting imminent deportation.

The DREAM Act, which is up for a House vote right after Thanksgiving, would provide Fredd, and undocumented students like him who have grown up here, a pathway to citizenship. It is imperative to make sure that the legislation passes so we do not need to expend energy each time Immigration and Customs Enforcement decides to detain and deport another talented, young student from this country.