Home »Immigration»Immigrant Students Starve for Their DREAMs on Thanksgiving 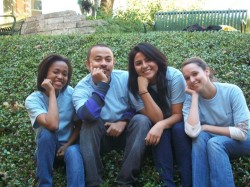 As you recover from your Thanksgiving meal, remember that dozens of undocumented students are literally and metaphorically starving for their DREAM to obtain a pathway to citizenship.

It’s Day 17 of the hunger strike conducted by undocumented students in Texas, who are hoping to get Senator Kay Bailey-Hutchison (R-Texas) to support the DREAM Act. Thus far, the Senator from Texas has refused to support the measure. “We’re giving up our health and body for the DREAM Act,” says Him Ranjit, a 19-year-old sophomore studying biomedical engineering and government at the University of Texas at Austin, who was brought here at the age of 10 from Nepal.

No matter what the propaganda disseminated by the right-wing says, undocumented immigrants contribute positively to our country and in most cases, had a hand in the food and drinks that would be on our dinner table tonight. And while you have your loved ones close to you, remember that thousands of families, both documented and undocumented, are missing someone because they are locked up in detention or deported.

Talk to your friends and families about immigrants seeking the American dream at the dinner table tonight. Get them to support the passage of the DREAM Act before the end of this year. Thousands across the country will be thankful for the opportunity to serve and contribute to this great country.