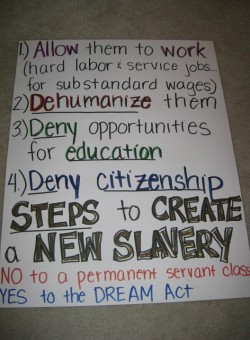 A new bill (HB-25) sponsored by Rep. Tom Rice (R-Norcross) would require the 35 public universities in Georgia to conduct citizenship verification for all students. That means several millions spent conducting regular witch-hunts to ensure that no undocumented student gets access to higher education, and millions lost in future productivity. But more than that, it means cultivating a culture of fear in the South, and hundreds of lives cast aside in the shadow of that fear.

The proposed legislation is bad public policy without economic merit. At least one former Georgia Regent, Erroll Davis Jr., has enough fiscal sense to realize this. Of the 311,000 students enrolled in the university system, 501 — one-sixth of one percent — are undocumented. Of those 501, every single undocumented student with no pathway to citizenship pays out-of-state tuition. Only 29 of the 501 attend universities with limited spots, with only 2 attending competitive universities.

Since Georgia Regents have already banned competitive universities from allowing undocumented students to enroll, it makes no sense to enact a statewide ban. In fact, if the proposal is adopted, the state would still have to spend public monies to educate undocumented immigrants from K-12, only to discard them as fodder, tell them to seek higher education elsewhere, and never reap the rewards that these students can deliver after they gain legal residency.

The students and the state should not suffer just because certain lawmakers want to play George Wallace and block the doors of higher education to Latinos. Condemn HB-25 now and tell Georgia to stop this madness.

Photo credit: Picket the Board of Regents