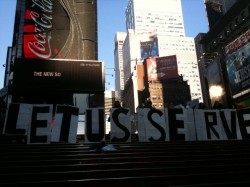 Fifteen protesters are facing criminal trespass charges after an immigration demonstration in Senator Kay Bailey Hutchison’s San Antonio office yesterday. After starving for their dreams for more than 20 days, they sat in the office with a simple ask: that the Texas Senator support the DREAM Act, legislation that would provide undocumented students with a pathway to citizenship. Senator Hutchison did not want the arrest, since it would bring unwanted attention to her office, but the building owner called the cops on the students and allies last night.

Five University of Texas, San Antonio, students, a professor, a minister, and a former councilmember were among the people arrested for peaceful civil disobedience. As of now, most of them have been released. “I don’t care if I have a mug shot now, I would do it again,” says one of the undocumented students who was arrested and released after the actions last night.

Hutchison has stuck to her guns, stating that she “appreciates these students’ passion for their cause but hopes they can find safer and more peaceful ways to voice their opinions.” One can hardly blame the students — they have waited a decade, made calls, written letters, given speeches, and risked their lives for the right to live in and contribute to the United States. That’s more than what the average American has ever done in terms of civic duty.  What more does the Senator need to realize that a vote for these students is a vote for America?

America is a country of laws; in the case of immigration, poorly written laws that desperately need reform. It is an abomination that a child brought to the United States without proper authorization does not even have the opportunity to ever correct their status. By calling for the DREAM Act, all these young adults are asking for is the mere chance to get in line and no actual guarantee that they would ever get citizenship. It’s a pretty small ask and it is nonsensical to oppose it.

While Fox News Latino is crediting the honorable Rep. Luis Gutierrez for his hard work in pushing for DREAM Act legislation, it is obvious that without the courageous actions of young immigrants across the country, the bill would not be on the legislative calendar. The White House has also started to pour more resources into making sure that the legislation passes in the lame duck period.

Pass or fail, these students are not going away. We can be stubborn pig-headed Americans and turn our backs on them or we can be smart and benefit from their hard work and talent. After all, if a few hundred disenfranchised young students can sit and starve their way into headlines without any funding or institutional support, and gain the support of many along the way, imagine what they can do with some legal rights in the United States.