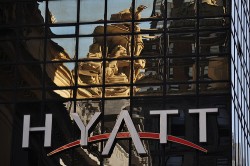 The WalMart of hotel chains — Hyatt Corporation — just posted quarterly profits that show a notable 600% jump with their stock prices climbing at around the same rate. At the same time, the hotel chain has the worst safety record in the industry, with a mostly immigrant workforce suffering the brunt of danger. And some of these workers are no longer willing to stay silent and suffer.

UNITE HERE, a union representing over 100,000 workers in 900 hotels across America, has filed worker safety and injury complaints against the Hyatt in eight different U.S. cities. Public records submitted by the hotel chain indicate a 50% higher injury rate than the rest of industry. A study published in the American Journal of Industrial Medicine reports that female hotel workers were 50% more likely to be injured than male workers, and Latina women had almost double the risk of injury as their white female counterparts.

Additionally, the Occupational Safety and Health Administration (OSHA) recorded 750 injuries at these 12 Hyatt properties between 2007-2009. Contrary to popular belief, most injuries occur over a period of time doing routine and repetitive work, rather than through accidents or emergency situations. The OSHA complaint offered recommendations like using fitted sheets to reduce the number of times women must lift 100-pound mattresses, supplying long-handled mops and dusters so workers can avoid climbing and crawling, and scheduling reasonable room quotas to help prevent injuries.

Thus far, Hyatt has only offered a canned response: that by filing a legal complaint, UNITE HERE is trying to gain members and Hyatt cares deeply about the safety of its workers. Funny, it is not showing any caring whatsoever by being the most dangerous hotel-chain for its employees.