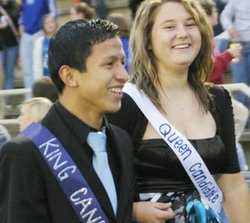 I was hunkering down to write about the case of Bernard Pastor,  an undocumented youth from Ohio who seemed headed to spend Thanksgiving in detention, when word came from Senator Sherrod Brown’s office that his deportation has been delayed. [Ed note: though Pastor’s deportation has been delayed a few weeks, reports say that he remains in detention.]

Bernard Pastor is an 18-year-old, devout young man who was brought to the United States at the age of 3 to escape religious and military persecution in Guatemala. He worked hard and graduated as one of the top five students in his class. Bernard is also a gifted athlete who takes pride in his country. He was nominated for Homecoming King and sang the National Anthem at his team’s soccer games.

Bernard dreams of going to the seminary to serve his community in Ohio as a pastor. On Saturday, November 20th, he was on his way to help at his church when he got into an accident. Since Bernard was driving without a license, the police took him to jail and started deportation proceedings.

Overnight, Change.org users sent more than a thousand emails to Senator Brown’s office and the Department of Homeland Security. America’s Voice, an pro-immigration organization lobbying hard for the DREAM Act this year, also joined in the effort, along with other students and community members who rallied behind him. After a frenzy of activity from aides of Senator Sherrod Brown and U.S. Rep. Steve Driehau, Brown’s office announced that DHS is willing to let Bernard stay in the country for several more weeks.

Other students still in detention over Thanksgiving include talented singer Fredd Reyes from North Carolina and an aspiring journalist, Jennifer Abreu, from Kentucky. The United States is cleverly spending over $200 a night of taxpayer dollars to keep these non-criminal, young, hard-working, aspiring Americans in jail. Their future is now in our hands and we must ensure that the immigration system affords them administrative delay plus a chance to get in line.