Home »Immigration»Heroes and Zeroes of Immigrant Rights in 2010 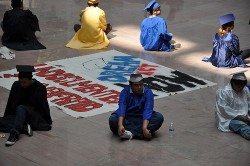 You won’t find these heroes with glitzy awards parading down any red carpets. But they deserve recognition for their role in the fight for immigrant rights.

Undocumented immigrant youth: There’s no doubt thatimmigrant youth like the DREAM Act 5 who sat at McCain’s office, the Trail of Dreams, and Texas hunger strikers, along with allies such as the Wilshire 9 are the heroes of 2010 for bringing national attention to the plight of undocumented students through hunger strikes, walking thousands of miles, civil disobedience actions, direct lobbying, and generating thousands of calls into Congress. They were always the leaders of their own movement, and that was finally recognized by national media and beltway groups in 2010.

Nicky Diaz Santillan: When Meg Whitman fired her undocumented immigrant housekeeper, she never thought that it would cost her the coveted position of California Governor. Instead of cowering in the shadows, Nicky Santillan went public and exposed a hypocrisy that runs deep in the American psyche: Americans use and benefit from undocumented labor in their households (and farms), but cause an uproar about giving them the legal right to live in the United States. Allegations that the housekeeper was exploited, disrespected, humiliated and emotionally and financially abused by Meg Whitman did not sit well with California voters.

Rep. Luis Gutierrez: When is the last time a politician got arrested for immigrant rights? Never. Gutierrez may have made some regrettable choices, such as excluding same-sex binational couples from his comprehensive immigration reform bill, but he also made a 180 degree turn, admitting his mistake. While he was initially cold on a standalone DREAM Act, he came around to support immigrant youth, arranging valuable meetings and personally picking up votes for the DREAM Act at the gym the morning of the House vote. Sure, he’s not the king of immigrant rights, but it would be wrong to exclude him from our list of heroes at a time when hardly any politician stands up for immigrants rights without expecting something in return.

Jorge Ramos: Powerful Univision commentator Jorge Ramos has made even President Obama squirm in his seat with tough questions when it comes to pushing for immigration reform. Just a month ago, he  donated $20,000 to Educators for Fair Consideration, a scholarship fund specifically for immigrant students. More people should follow his lead to ensure educational equity for undocumented students.

Tam Tran and Cynthia Felix. Their unfortunate and tragic death propelled immigrant youth forward and they will forever be remembered as leaders, pioneers and sheroes for immigrant rights.

Senator Harry Reid, for supporting immigrant rights in the face of attacks from his opponent, and for fulfilling his promise of bringing up the DREAM Act for a vote.

Kent Wong from the UCLA Labor Center for stating the obvious: if you don’t vote for the DREAM Act, you are a racist. And facing down the heat for it.

Michael Hill, lobbyist for the Catholic Bishops, for some spectacular reporting on the DREAM Act and tireless lobbying efforts for immigrant rights this past year.

Immigration attorneys Michael Kolken, Dave Bennion, and Mark Silverman, for their tireless efforts and commentaries in favor of the DREAM Act and immigrant rights in general.

The 3 GOP Senators who voted for the DREAM Act, Senator Dick Lugar, Senator Lisa Murkowski and Senator Bob Bennett. We thank your for your courage and conviction.

The staff at America’s Voice and Rachel LaBruyere from the Reform Immigration for American campaign for working extended hours, through bad health and terrible weather, and fighting their own directives in order to help bring the DREAM Act to a vote.

The Zeroes: I’ve purposely left out the rabid right-wing nutjobs who made calls to repeal birthright citizenship, wanted to send undocumented immigrants to internment camps or microchip them, and used the most racist campaign ads for their re-election campaigns. There will always be those who hate immigrants and want to deport everyone who looks remotely “Mexican,” so it is futile to make a list of them. Instead, the focus is on pivotal figures who are not necessarily anti-immigrant, but who let us down and came up with a big fat zero when it really mattered.

Senator Chuck Schumer (NY), the chair of the Senate subcommittee on Immigration, barely beats President Obama for the number one spot. He promised to introduce a CIR bill on Labor Day last year. All we’ve seen is a flimsy (and bad) proposal. His staff had abandoned efforts to write the bill because Schumer neither understood the issue nor cared for it much. Last year, he insisted on using the derogatory phrase “illegal aliens” and blamed undocumented immigrants for taking American jobs. This year, Schumermet with another champion, Lou Dobbs, to discuss immigration reform and ignored undocumented students as they starved for days outside his office. Later, he would stop taking calls from immigration advocates altogether while his office pit advocates against each other. Senator Schumer slammed McCain for only wanting border security, then passed of the $600 million border security bill without getting any concessions from Republicans.

President Barack Obama expressed disappointment in the DREAM Act vote, but his administration is quietly resuming deportations to Haiti. In fact, the Enforcer-In-Chief is deporting undocumented immigrants at record levels and refuses to stop programs like Secure Communities and 287(g) despite mounting evidence that the programs led to the deportations of non-criminal immigrants. Worse, he has promised a grassroots campaign for the DREAM Act, possibly as a way to quiet requests for a stay on all deportations. How’s that change working for everyone? Read on about what Obama can do to change the tide.

Senator John McCain: From his danged fence ad to his assertion that undocumented immigrantsintentionally cause accidents on the road, John McCain is no longer even the shadow of the man who co-authored the McCain-Kennedy immigration bill in 2007. He used to be a co-sponsor of the DREAM Act and his vote against the legislation this year was not in opposition to the merits of the bill, but in a show of defiance to the Latino community, who he claims, abandoned him in 2008. USF Professor Bill O’ Hing sums it up best with regards to why immigration reform was not plausible this year: “Senator Kennedy died. And then so did Senator McCain.”

The Dem DREAM Killers — Kay Hagan (NC), Jon Tester (MO), Max Baucus (MO), Mark Pryor (AK), Ben Nelson (NE), are the 5 Democratic Senators who voted against the DREAM Act, and Joe Manchin (WV), who was at a family Christmas party but pledged to vote no. They didn’t even have the courage to voice their opposition loudly. DREAM students watched as Kay Hagan changed her vote when she realized the bill did not have the 60 to overcome filibuster. Remember these names. Get them out of office as soon as possible.

The Congressional Hispanic Caucus (CHC) makes our list of zeroes for practically little for immigrants.Chairwoman Nydia Velasquez gave her own portrait to undocumented youth from New York when they visited her office and asked her to support the DREAM Act. They wanted her support, not her photograph. She finally abandoned the wrecked CIR train and jumped on the DREAM bandwagon with Rep. Gutierrez to save face. As a collective, the CHC sold out undocumented immigrants during the health care debate without getting any concessions from President Obama. It took over a year of lobbying and cajoling to get them to support voting on a standalone DREAM Act and by that time, it was too late to make a difference. Try harder next time.