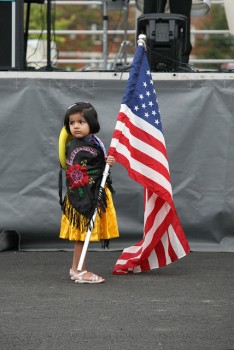 The New Year brings us a bad theatrical production of the Texas Chainsaw Massacre, directed by Texas state legislator Debbie Riddle. The chainsaw is poorly aimed at dangerous and threatening young Latino children in Texas who dare to attend K-12 public schools without knowing their immigration status.

HB or SB 22 is an anti-immigrant legislation that puts even Arizona to shame. It would mandate public schools in Texas to collect and maintain what Flavia Isabel from DreamActivist calls a “blacklist of undocumented students.” Riddle wants to know how many undocumented students attend schools in Texas and precisely who they are, and where they and their parents live. As reported yesterday, Texas sheriffs are already protesting Riddle’s other bright idea to impose an Arizona-style immigration law on them.

What does she plan to do with such knowledge considering public schools are not allowed oust students based on their immigration status? She says it is good for taxpayers to know where their money is going. That’s interesting, considering Riddle ignores the fact that these students and their parents pay taxes too, and she does not seem bothered by this taxation without representation.

I’ll tell you what Riddle and her cohort of Texas GOP legislators are really up to with this unfunded mandate that threatens to cut into school budgets and divert attention from real immigration reform. Riddle and friends may be hoping to create a climate of fear in Texas schools such that parents pull their children out of schools when administrators come around asking for their papers.

Much later on, they’ll follow in the footsteps of politicians like Meg Whitman and hire the same children as their maid and gardeners. See if you don’t have papers, you cannot go to school. But you can always work as a maid, cook or gardener. It’s hypocrisy and it is the kind of second-class citizenship that Riddle and her GOP legislators are planning for children of immigrants.

To organize against this latest attack, grassroots activists in Austin, Texas, are organizing a lobby day on January 25. Sign up here.

Immigration reform is critical. But the job of a school is to educate and not adjudicate such matters. We need to tell Texas state legislators to oppose this legislation in order to ensure that hate has no place in our institutions of learning and that no child is left behind.