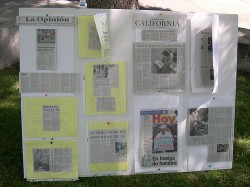 California is off to a bright start in the New Year with Assemblymember Gill Cedillo reintroducing his version of the DREAM Act for California students. While the state-based legislation does not confer any immigration benefits, the proposed law would grant qualifying undocumented college students access to institutional financial aid from the University of California, California State University, and Community Colleges. It is a small step that the state can take while we wait for the country to emerge from the dark ages and get on with immigration reform.

The two-part legislation, AB 130 and AB 131, would allow students that already meet the in-state tuition requirement to apply for and receive Board of Governors (BOG) fee waiver and institutional student aid, in addition to Cal Grants. It’s not a hand-out. Undocumented students and their parents already pay into the system thereby providing state financial aid for U.S. citizens and legal residents, with no right to access the same aid. If approved, California will become the third state to grant financial aid to undocumented students, after Texas and New Mexico.

The legislation is good public policy in the absence of broader reforms. California will need more college graduates in coming years. In a recent report, the Public Policy Institute of California predicted 41% of jobs will require a college education by 2025, but only 32% of workers in the state will have the necessary education. California can’t promise successful students a path to legalization, but the educated are likely to find a way through employee sponsorship or marriage or new federal legislation.

The California DREAM Act is supported by a broad coalition of labor, education, and business groups in California. Undocumented students in the state have fought for the legislation for almost five years only to see Governor Schwarzenegger veto the bill three times in the past despite popular support for the legislation. But this time, new Governor Jerry Brown has promised that it would be one the first bills he signs after the budget is approved.

It’s time to join with these DREAM activists to voice our support for the bill and make sure that it clears the California legislature as soon as possible.