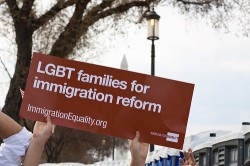 While couples across the United States are celebrating their commercial and non-commercial manifestations of love for Valentines’ Day, Anton and Brian from South Philadelphia may have to bid a painful goodbye to one another. The United States is deporting Anton to Indonesia, a country where he is certain to face persecution.

Anton Tanumihardja came on a tourist visa to the United States in 2002 and overstayed his visit. He makes a compelling case for asylum as a gay Indonesian; he is also ethnically Chinese and Catholic, and all three characteristics make him a minority and potential target for violence in Indonesia. The Board of Immigration Appeals granted him a 90-day extension that ends on February 14. But they have not ruled out reopening his case.

Last year, Anton started dating Brian Andersen, an American citizen. If they were a straight couple and could get married, Anton’s union with Brian would mean he would get to stay in the United States. Alas, as a gay couple bi-national couple in the United States, Brian cannot sponsor Anton for legal residency, let alone citizenship. The Uniting American Families Act, a legislation designed to afford same-sex binational couples the same benefits as heterosexual binational couples, would fix this problem but Congress is unlikely to consider the legislation anytime soon.

In the meantime, Anton and his partner Brian are not asking for a change in the law or citizenship. They just want more time to keep Anton in this country while he pursues his asylum claim. Anton has committed no crime and the Department of Homeland Security has broad discretion to allow Anton a longer stay in this country so that he can continue to make a claim for asylum.  Supporters are urged to contact PA Senator Bob. Casey, Congressperson Bob Brady, and Janet Napolitano to stay his deportation and keep Anton and Brian together for Valentines’ Day.