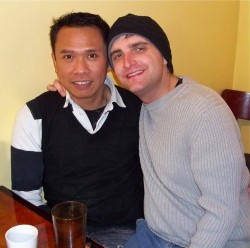 Yesterday, we reported on Anton Tanumihardja, set to be put on a 1 p.m. flight to Indonesia. Despite a pending asylum claim, he faced involuntary removal from his home in Philadelphia and his U.S. citizen partner, Brian Anderson. Instead, we’re able to report today on the welcome news that Anton received a stay of deportation from the Department of Homeland Security (DHS) so the Board of Immigration Appeals can reopen and adjudicate his asylum case.

Under our current system, individuals in removal proceedings who seek to reopen asylum cases remain in deportation because different parts of the immigration bureau handle these claims. As a result, someone can have a pending asylum case, yet still be deported from the country.

Anton, 45, had his initial asylum claim filed by an attorney who did not have the best grasp on the persecution that Anton could face if sent back to Indonesia. After his initial claim was denied early in the process, Anton got a new lawyer and petitioned to reopen his asylum case. However, he remained in deportation and forced to leave the country and his partner, Brian, until DHS granted him a last-minute reprieve.

About a 100 members signed on to a petition to stop the Valentine’s Day deportation within a few hours. Thanks are also in large part due to the work of Lavi Soloway, one of the founders of Immigration Equality, who is running a Stop the Deportations campaign for same-sex bi-national couples. With Congressional action on immigration reform unlikely at this point, Soloway seeks to create a DHS policy for exercising discretion when it comes to bi-national same sex couples, who cannot get married under federal law and thus legalize their loved ones that way.

Soloway mentions the administrative relief given to widowed spouses of U.S. citizens and certain DREAM Act students in the past. While DHS only gave relief to widowed spouses following some landmark court decisions and DREAM students still face deportation proceedings despite requests from Senators, campaigns to stop the deportation of LGBT individuals in bi-national couple relationships help to bring more attention to this pressing issue.

Anton is not completely out of the woods yet, since the BIA can always deny his asylum claim again, which would place him back in deportation proceedings. That’s why it is necessary to keep making calls for deferred action for Anton and others in a similar situation. But for now, this same-sex bi-national couple can take a breather.